In that case, the SCC upheld Parliament’s right to steal veterans pensions, because Parliament had made clear its intent to do so.

Parliament has the right to expropriate property, even without compensation, if it has made its intention clear and, in s. 5.1(4), Parliament’s expropriative intent is clear and unambiguous. 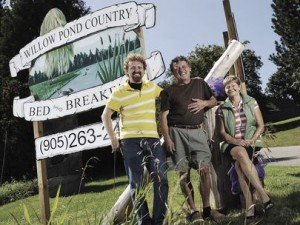 Bureaucrats in the small of Municipality of Clarington, Ontario have decided to make an example of the Jaworski family.

“I  will always let my son use our property for what he believes in, and for the freedom we came to Canada to find,” said Marta Jaworski. “If he wants to host a seminar to support more liberty in Canada, we’re not just happy, but proud to let him do that. That’s what you do as parents.”

The irony of their current bureaucratic nightmare is not lost on the family that left Poland in the mid-1980’s to escape exactly this sort of tyranny.

“The municipality tells me that they work on a complaint basis,” said Peter Jaworski, “although I don’t believe any of our immediate neighbours complained, since we’ve been doing this for nine years without a single complaint or problem, and being very public about it.”

The Jaworski family website for their Bed and Breakfast operation lists a press release about their current troubles, the end of which has a link for donating to their legal fund, if you are so inclined.

I urge you to support this freedom-loving family any way you can.  If you live in the area, please contact the mayor and councilors about this case.  Demand they put an end to this case.

Ezra Levant’s article on this case begins, appropriately, by saying,  “One of the few thrills of working as a bylaw enforcement officer is making people cry.”

It’s astounding what happens when the rules become more important than people.  No, make that disgusting…

This case makes me ashamed to be Canadian.