For daring to express your displeasure at watching a total stranger grope your wife… all because you want to take her somewhere romantic for a vacation… you’re placed on the TSA’s domestic extremist watch list.

It doesn’t have to make sense.  It’s government policy!

The TSA, that great haven for Big Brother’s watchful eye, will keep you safe from everyone except the TSA.

The entire premise is a lie, of course.  The TSA couldn’t put out a fire inside a wet paper bag.  But they can condition a nation to accept the unacceptable, that much seems clear.

TSA’s BDO-trained security officers are screening travelers for involuntary physical and physiological reactions that people exhibit in response to a fear of being discovered. TSA recognizes that an individual exhibiting some of these behaviors does not automatically mean a person has terrorist or criminal intent. BDOs do, however, help our security officers focus appropriate resources on determining if an individual presents a higher risk or if his/her behavior has a non-threatening origin. Individuals exhibiting specific observable behaviors may be referred for additional screening at the checkpoint to include a handwanding, limited pat down and physical inspection of one’s carry-on baggage.

Naturally these “security agents” cannot comprehend the difference between complete and utter disgust with what a passenger is being forced to undergo and “involuntary physical and physiological reactions that people exhibit in response to a fear of being discovered“.

That’s if you can manage to keep your disgust internalized, at least verbally.

Speak your disgust out loud and you can be guaranteed you’ll be missing your flight, and that’s just for starters.

If you dare enter the airport and then decide you’re not going to take this crap and try to leave… good luck with that.  You are now considered a terrorist.  Who else would enter an airport and then leave without catching their flight?

Disgust and contempt of the TSA “enhanced screening process” is simply not allowed. 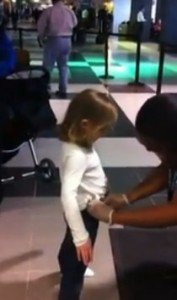 Once you enter a “federal screening area”, you are at the complete mercy of the TSA pedophiles. It is a crime to leave the area without being subjected to their unwanted attentions.

Just ask the Drexel family, who had to watch in horror as a TSA pedophile groped their 6-year-old daughter.

America, long the beacon of hope and liberty for our world, has utterly lost her way.

It’s sad, and pathetic, and on more levels than I can even imagine, terrifying to watch the slide into oblivion under the guise of “security”.

But don’t you dare show any of that emotion inside the TSA screening area.

You must smile and express nothing but state-mandated emotions as you daughter is subjected to what is a crime punishable by prison anywhere but inside an airport.

Nowhere else is a person expected to subject themselves to what amounts to sexual abuse by a total stranger, all because the state says you must.

How can you NOT be disgusted by a group of people who DEFEND groping a six-year-old girl?

Unless, of course, your motive is to create a nation of cattle, used to being poked and prodded at any and every official doorway.  Then it’s a completely rational course of action.

So far, it seems to be working. While there has been outcry, there has been no storming of the palace gates, demanding a change to this obscene policy.

Sadly, it doesn’t appear there will be, despite the most horrifying actions on the part of federal employees.

There is a reason I will not fly. There is absolutely no way I will, in any form or fashion, pretend that I condone this garbage.  I refuse.

Subjecting children to this sort of “conditioning” is wrong on every level.

What utterly blows my mind is how disconnected a person must be to think that touching a child in this manner is acceptable for ANY reason, ANY place and ANY time.

John Tyner dared tell one of these morons that if they touched his penis, he would have them arrested.  That got him a lot more attention than he wanted. For the “crime” of wanting to maintain his dignity, Tyner faced a $10,000 fine and possibly other court battles too.  All because he refused to be sexually violated by some state goon.

Gone are the days when the refusal to be sexually violated was a virtue.  Now it is a sin punishable by fines and jail time.

The TSA has clearly lost all touch with reality.  But what’s awesome is the double-standard for Muslim women.  Janet Napolitano is nothing if not a world-class hypocrite.   This excerpt from PJTV tells that tale:

Every one of these people should be charged, tried and convicted for pedophilia and sexual abuse.

Texas had the opportunity to take a stand, to stake out the high moral ground on this issue, and they failed.

One can only hope and pray there is another State in the Union that will pick up the ball that Texas so tragically dropped, and carry it in for a touchdown.

It’s the only hope we have for a Free nation to rise from the contemptible shadow of its former self.