In the wake of the utter destruction of the Bloc Quebecois and the Liberal Party of Canada the cries for saving the taxpayer subsidies to these failed political parties is already getting some backing.

None other than the stalwart defender of liberty, Jean Chrétien,  has gone on the CBC begging for Harper to keep the political party trough-feeding that Chretien’s Liberal party introduced.

That Chrétien has crawled out of the woodwork to defend the policy says alot.  He is the politician who passed the legislation in 2003, claiming that it would be “revenue neutral” to taxpayers.

That phrase, revenue neutral, should be a loud warning siren to those of us stuck paying for failed government programs.

Federal funding of political parties will be revenue neutral.

The HST will be revenue neutral and won’t affect familes.

The Gun Registry will cost only $2 million dollars. It will pay for itself in user fees.

Lies, every single one.

There is no such thing as a government program that is “revenue neutral“.  Governments have no concept of holding themselves financially accountable, let alone financially restrained.   Why should they?  When they need more money, they just extort it from the electorate, commonly known as “taxpayers”.

Every political party that receives more than 2% of the votes in a general election is eligible for federal funding.

This is how Elizabeth May was able to get elected this past election.  Her party received almost a million votes in the election prior, and let May’s Green party cash in to the tune of about a million dollars per year.

Without that huge cash windfall May would not have been able to pay for all the election advertising, she’s likely never have been successful.  That is if you call getting elected at the cost of losing over a third of your party’s votes compared to the previous election “successful“.

There is something seriously wrong with government funding of political parties. Forcing taxpayers to fund political parties they do not agree with is fundamentally wrong.  At its base, it’s extortion.

The Canadian Taxpayers Federation (CTF) has been opposed to the subsidies since they were first introduced.

“We’re in tough economic times…”We’ve opposed the subsidy scheme since 2003 because political parties should have to seek voluntary donations from Canadians, not steal tax dollars from the public treasury,” said the CTF’s Kevin Gaudet. 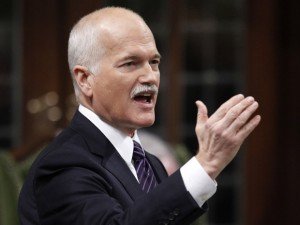 During the campaign Jack Layton lashed out at Prime Minster Harper after the news broke.  Layton’s NDP gets over $5 million each year in subsidies, and obviously he’s loath to see them go.

That’s hardly surprising.  Layton is noted for nothing if not his ability to feed at the government trough.  He holds the dubious distinction of having the highest annual expense budget in Parliament.

Like all good piggies, Layton has become used to his government handouts and doesn’t want them to end.

Layton’s claim is that only those who can afford to raise money will be heard.  I fail to see what’s wrong with that.  If a political party’s policies are not able to gain wide public support, why on earth should anyone be forced to pay to keep those unpopular ideas afloat politically?

They shouldn’t.  And that’s what terrifies Layton.

With the Greens and Bloc Quebecois not holding official party status in the House of Commons they don’t get all the perks and budgets that parties with 12 or more members of Parliament get.

That makes their desire to keep these subsidies in place.   It’s pretty much their only source of funding.

Which is why the Liberal Party has trotted out Chretien to beg for the subsidy.   Since the Liberals were just handed their worst electoral defeat in history, Chretien is well aware of the fact that voluntary donations will be all but impossible to come by.

“A subsidy where parties make no effort whatsoever to raise money is not acceptable, I don’t think, to Canadian taxpayers,” Mr. Harper said during the run-up to the election.

I sincerely hope that Harper keeps this particular election promise.  If the other political parties cannot raise enough money from their constituents to fund their political ideologies, too bad.

If you support those ideologies, then you should be willing to buck up for them.

I shouldn’t be forced to pay for them, and neither should the rest of Canadian taxpayers.