There’s something to be said for the ability to vote yourself raises, knowing that nobody can stop you.  Such is the sense of entitlement of the elected ones, or the “entitled class” as I like to call them, at both the provincial and federal levels of our government.

Here in BC the entitled class voted themselves a healthy pay raise at the same time they were demanding government workers to take pay cuts, and while much of the province was losing their jobs in the forest industry.

Needless to say there was a huge public outcry and the entitled class relented… deciding it was better to suffer with their healthy paychecks than the wrath of voters.

With the passing of another federal election there is a fresh new crop of political retirees that we are now forced to pay for.  And if that wasn’t bad enough, there is also the fresh new crop of trough-feeders heading for  Ottawa, and they’re laughing all the way to the bank.

And why not?  They’ve just one the lottery of a lifetime. 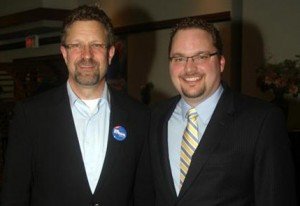 Take the case of Chuck Strahl and his son Mark, here in the riding of Chilliwack–Fraser Canyon.  Strahl  senior retired just as the election was called so he could pave the way to the federal trough for his son Mark.

In doing so, Strahl senior will earn roughly $120,000 a year from his gold-plated pension according to a document released by Canadian Taxpayers Federation.

That’s a pretty good reason to smile like a Cheshire Cat, isn’t it Chuck?

Chuck and Mark Strahl are smiling all the way to their taxpayer-funded banks, Senior with his $120K/year pension, Junior with his $160K/year MP salary.

Strahl senior felt a little hard-done by when questioned by reporters about his pension a year ago.  The Chilliwack Times said the following:

At that time, Strahl conceded that the pension is “hugely generous,” but for “some people, if I make a dollar a year I’d be overpaid and 10 cents of pension I’d be a disgrace to the human race.  I can’t win this fight.”

Interesting comment from one of the founding Reform members of parliament who said they’d refuse their MP pensions.  It was a fundamental part of the platform the Reformers ran on…. cleaning up the entitlements in Ottawa… but that idea quickly collapsed along with their principles as soon as they were elected.

Suddenly those gold-plated pensions weren’t so bad after all.

But once again I digress…

Now it’s time for Strahl junior to sidle up to the trough for his entitlement.  And it’s quite an entitlement.

And, like his father, he’ll be eligible for that gold-plated pension if he wins a single election four years or so from now.

When working Canadian families can’t make half of what a single MP makes every year it’s clearly time for some big changes in Ottawa.

The sad reality is there is no political party willing to sacrifice big pensions, big paychecks and even bigger annual expense accounts to bring a sense of sanity back to Parliament.   It seems the second they get elected, an MP’s primary concern is  how much they can get for themselves.

Jack Layton and his wife Olivia Chow are perfect examples of pigging at the government trough.  Together they rack up over a million dollars in expenses each year.  Their salaries are, of course, on top of that, so we sure can’t count on the NDP to save us from the insanity.

Here in the riding of Chilliwack–Fraser Canyon the Strahl dynasty will roll on.  Strahl senior has handed his seat at the trough to his son, who, as we can see by the picture above, is smiling all the way to the bank.