Recently the folks at Westboro Baptist Church have been back in the news with their high-profile, if tacky protests at military funerals around the nation.  The story spread like wildfire through the blogosphere about how the lunatics from Westboro Baptist Church were prevented from protesting at the funeral of USMC Staff Sgt. Jason Rogers, killed in action in Afghanistan on April 7th.

It’s an inspiring story about how the entire town came together to protect the family from the indignity of their son’s funeral being disrupted by a Westboro anti-war protest.  It’s not the first time this has happened, of course.  It just seems to be the first time the news has broken far and wide.

From a comment made on the story at IHateTheMedia.com… Garilynn Smith relates her own personal experience:

This group also tried protesting my husbands funeral, SFC Scott R Smith and they were shut down. They went around handing out fliers at local stores where they were told they should leave town because hunting accidents tend to happen a lot…  The next day at the funeral they showed up at the cemetery and were told sorry this is private property and so they moved to the road where state troopers said oh sorry this is a highway its too dangerous to protest here so they were forced to leave.. I told PGR (Patriot Guard Riders) I wouldn’t be held responsible for my actions if I saw one of them using my husbands name… I’m glad the people of Rankin allowed this heroes family the funeral he and they deserved… 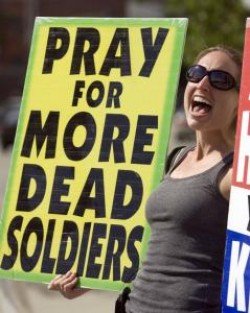 What’s been fueling the wildfire under this story is how it was essentially a plan for dealing with future Westboro Baptist Church protests.

There is a time and a place for protests, and getting in the faces of grieving family members simply is NOT it.  Tacky signs like the one this woman is holding show how classless these people are.

A friend of mine commented on an internet news group recently that this is free speech, like it or not.  It is their right to protest against the war.  Don’t like it, tough shit was basically his attitude.

His view is that Freedom of Speech trumps every other right, a position I find utterly absurd.

That’s like saying that my right (in the United States) to carry a firearm trumps the right of the store owner to say that no firearms are allowed in his store.

Jim Hinter, the former president of Canada’s National Firearms Association got his knickers all in a twist years ago over actor Harrison Ford’s decision to not allow hunting on his private land.  Hinter’s claim was that Ford’s property was some of the best hunting territory in the state, and therefore hunting must be allowed.

Again, this is utterly absurd.

It’s Harrison Ford’s private land.  He and he alone gets to decide what will and will not transpire on his private property.  The fact that he’s rich enough to buy a huge parcel of “hunting territory” is entirely beside the point. It’s his land.  Period.

Does this mean I’m anti-hunting because I support Harrison Ford’s right to say what will and will not be done on his private property?

Hardly.  Yet that’s exactly what the then-president of Canada’s National Firearms Association tried to tell me.

When Rights collide, which one wins?  Who gets to decide?

This is hardly a debate I’ll be settling here, but there are some things I feel need to be said.

They’re not directed at Westboro Baptist Church specifically, although they are the catalyst for my deciding to write about this clash of rights.  It’s aimed at anyone who is struggling to figure out what happens when one right bumps up against another.

Contrary to what most readers here probably think due to my outspoken writings, I am an intensely private person.  While I have no problem writing about what I think on a wide range of subjects, my private personal life is generally off limits.

I don’t have to agree with a word they say to believe they have the right to say it.

As Ezra Levant is so fond of saying on Sun TV these days, “Freedom of Speech is the only gift you MUST give your enemy if you want to claim it for yourself.”

That being said, rights do not exist in a vacuum. They must co-exist with other rights.  The right to privacy, for example, as in the case of the family trying to bury their dead son.

Families have the right to privacy as they bury their slain sons and daughters.

I don’t give a crap if you agree or disagree with troops fighting wars in foreign countries.  I don’t agree with it.  I don’t believe Canada should be bombing Libya and I don’t believe the United States should have troops in dozens of countries around the world.  It doesn’t change the fact that those are decisions made by people far higher up the food chain than me.

Does your disagreeing (or mine) with a war give you the right to invade someone else’s privacy to hold your protest?

I’m biased toward personal privacy, of course, and freely admit that.

In a battle between your right to call me nasty names when I’m burying my son at a private funeral service… you lose.  Period.  Absolutely.  Every single time.  No question.

Does that mean I’m preventing you from exercising your right to free speech?

You’re free to practice your freedom of speech almost anywhere else you like.  At your church, for example.  It’s your pulpit, and I have no intention of stopping you from saying anything you want from it.  I sure won’t be stepping foot inside it to listen to you though.

Do I agree with the people who vandalize Westboro Baptist Church property because they disagree with what’s being said inside the church? 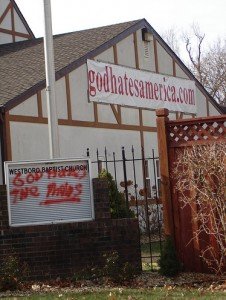 If WBC can disrupt military funerals with rude and insensitive protests, telling grieving families they are happy a soldier is dead, then a little vandalism and spray paint seems pretty mild in terms of retaliation.

What appalls me about the entire situation is that the membership and leadership of Westboro Baptist Church seem to forget that it is the soldier who fights and dies to protect their right to say their offensive things about dead soldiers.

Brave men and women have given their very lives to protect the right of  Westboro Baptist Church’s leadership and membership to be offensive and disrespectful.

It is the Soldier, not the minister
Who has given us freedom of religion.

It is the Soldier, not the reporter
Who has given us freedom of the press.

It is the Soldier, not the poet
Who has given us freedom of speech.

It is the Soldier, not the campus organizer
Who has given us freedom to protest.

It is the Soldier, not the lawyer
Who has given us the right to a fair trial.

It is the Soldier, not the politician
Who has given us the right to vote.

It is the Soldier who salutes the flag,
Who serves beneath the flag,
And whose coffin is draped by the flag,
Who allows the protester to burn the flag.

Every right we so freely trample into the dust has been won by soldiers who fought and died so that we could debate the rightness and wrongness of it all.

We must never forget that.  We must also never forget those brave men and women are due respect for that ultimate sacrifice, whether or not we agree with the war that cost them their lives.

Your right to freedom of speech does not trump the grieving family’s right to bury their dead son in privacy and dignity.

And nor should it.