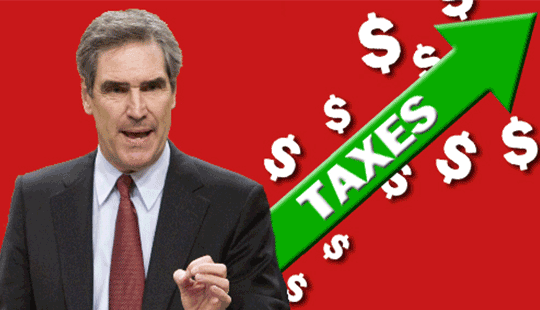 A $75 tax on anything with a hard drive?  Sounds ludicrous, doesn’t it.  But so did a tax on blank CDRoms back in 1997, and that came true faster than you can say “Liberal-New Democrat-Bloc Coalition“. I’ll get to Charlie Angus and his proposed iPod Tax in a minute.

I felt (and still feel) that this type of wealth re-distribution is appalling and disgusting.  If musicians can’t make a go of it, I’ll feel bad for them, but unless I like their music, I sure don’t think I should be forced to pay their rent.

But it’s typical of the Liberal mindset.  Someone’s got to pay.  That’s their mentality.

I say that because they’re the ones who brought in this stupid tax originally.  The tax for MP3 players, IPods included, has always been on the books.

In 2005, the Federal Court of Appeal overruled a 2003 Copyright Board decision which had applied the blank media levy to MP3 players such as Apple Inc.’s iPod, on the basis that such devices did not qualify as “audio recording medium” as per the Copyright Act definition. Before this, the proposed rates were $2 for players with less than 1 GB of capacity, $15 for players up to 15 GB, and $25 for players 15 GB and over.

What’s hilarious is listening to the NDP hack, Charlie Angus say the iPod Tax is a Conservative Party fantasy, when it was Angus himself who introduced the notion in a Private Members Bill.  But what’s the truth got to do with anything, eh Charlie?  It’s election time!

NDP MP Charlie Angus presented a Private Member’s Bill that proposed a levy on devices including iPods, MP3 players and smart phones. The fee, which could be up to $75 per device purchased, would be an extension of existing taxes on blank audio recording media like CDs and audio cassettes…

It’s actually the Conservative Party who is alone in opposing the notion of an iPod tax.  No, I don’t expect you to believe me.  Here’s what Industry Minister Tony Clement and the Minister of Canadian Heritage and Official Languages Honourable James Moore stated back on December 14, 2010:

“We are here to confirm that the Harper Government will not bring in an iPod tax as part of its copyright legislation. The iPod Tax has been proposed and supported by all opposition parties. We simply cannot support the opposition’s massive new iPod Tax on Canadian music lovers. The iPod Tax would add up to $75 to the price of every mp3 player and smart phone on the market. It would hurt the economy, punish consumers and families, and send the wrong message during this fragile economic recovery.O ur government is committed to ensuring fairness and balance for consumers and creators as we update Canada’s copyright laws. The opposition’s iPod Tax is not fair to anyone. It would just make it more expensive for Canadians to listen to Canadian music and hurt our music industry.”

So, while the “opposition parties” whine and snivel about the so-called “attack ad” below, they’re being disingenuous at best, if not outright lying to the Canadian public in their attempt to get elected this May.

Now, that’s not to say there aren’t some serious flaws in the Conservative’s Bill C-32, their reform of the Copyright Act.  The Conservatives insistence upon digital locking technology (designed solely to protect big business, NOT the consumer) is hardly appropriate and completely undermines the concept of “fair use”.

If you want to have some fun this election, ask your local NDP, Liberal or Bloc candidate why they want you to pay an additional $75 for your iPod, Smart Phone or MP3 player.  I’d love to hear what drivel they spout at you!

Alternately, you could ask your Conservative hopeful or incumbent why they favour big US business over the rights of Canadians to fair use of the digital products they’ve purchased.  🙂