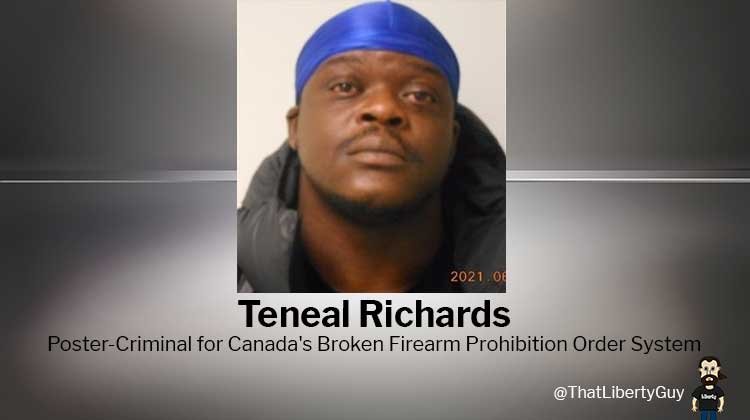 It may be a surprise to you, but it’s no surprise to me that our justice system lost track of another violent offender and repeat violator of a Firearm Prohibition Order. This news release from the Ontario Provincial Police reminded me that this is a regular occurrence.

The Repeat Offender Parole Enforcement (R.O.P.E.) Squad is requesting the public’s assistance in locating a federal offender wanted on a Canada Wide Warrant as a result of his breach of Statutory Release.

He is currently serving a two-year and six-month sentence for possession of a prohibited/restricted firearm with ammunition and possession of a weapon contrary to prohibition order.

The offender is known to frequent the Niagara Region, Hamilton and Greater Toronto area.

According to court documents, on October 24, 2011, Teneal Richards shot Pierre Brochu, a small-time pot dealer, during a drug rip-off, although no record of a conviction for this crime is found on CANLII.org, the Canadian Legal Information Institute database.

[8] The fifth time that Mr. Brochu dealt with Dave was on October 24, 2011. In the afternoon he got a call from Dave inquiring about buying an ounce. Mr. Brochu told Dave that he did not have that much marihuana, but that he might be able to sell him half an ounce. A few hours later, Dave called and said that he was coming over. Around 8 or 9 pm, Dave called again and said that he was downstairs. Mr. Brochu went down to the west side door of the building to let him in.

[9] Dave was not alone. A video surveillance camera inside the building faces out through the west side door into a laneway. The images from the camera show that at 8:20:57 p.m., Dave arrived in the laneway with Teneal Richards and a shorter third male. Ninety six seconds after they arrived, Mr. Brochu appeared and opened the door. The three males entered the building at 8:22:40 and followed Mr. Brochu toward the elevators. Three minutes and thirty-nine seconds later, at 8:26:19, the surveillance video captured images of the same three males running out of the building.

[10] Mr. Brochu testified that within that three minute and thirty-nine second interval he had taken Dave and the other two men up to his apartment, intending to complete a marihuana transaction. Almost immediately after entering the apartment, Teneal Richards produced a handgun, grabbed him by the neck, and demanded that he hand over his money and his marihuana. He testified that both Dave and the third man assisted Richards in taking those things from him. Richards then cold-bloodedly shot him in the thigh and all three men fled from the apartment.

I’ll leave it to the politicians who passed the Statutory Release Law to explain why violent offenders like Teneal Richards must be released after serving two-thirds of their sentence.

Below is a brief overview of Statutory Release.

The law requires that federal offenders who have served two-thirds of a fixed-length sentence be released from prison under supervision at that point. This is called “statutory release”.

Historically, many offenders were granted early release based on a calculation of time off for good behaviour. In 1992, the Corrections and Conditional Release Act (CCRA) replaced this with statutory release. It is a type of conditional release because the offenders are supervised in the community. Unlike day and full parole, however, it is not granted by the Parole Board of Canada (PBC).

The Parole Board of Canada has a role in statutory release only if CSC refers a case to the Board for review. The Board’s role is limited to:

Why The Parole Board of Canada is, by law, kept out of the process unless specifically referred a case by Canada Corrections. Common sense would appear to indicate involving the Parole Board provides the best protections for the public – but I assume the public’s interests mean anything at all in this calculation.

Perhaps this is an issue for you to bring up with Marco Mendicino, the latest Minister of Public Safety.

While Mendicino is far more interested in taking legally-owned firearms from federally-licensed, RCMP-vetted firearm owners than tracking down violent offenders like Teneal Richards, it’s still a question he ought to seriously consider.

If you feel so inclined…

Please contact Public Safety Minister Marco Mendicino and encourage him to fix our our broken Firearm Prohibition Order system so repeat violent offenders like Teneal Richards are not given a free pass to offend again.

Send your letter, postage-free, to: