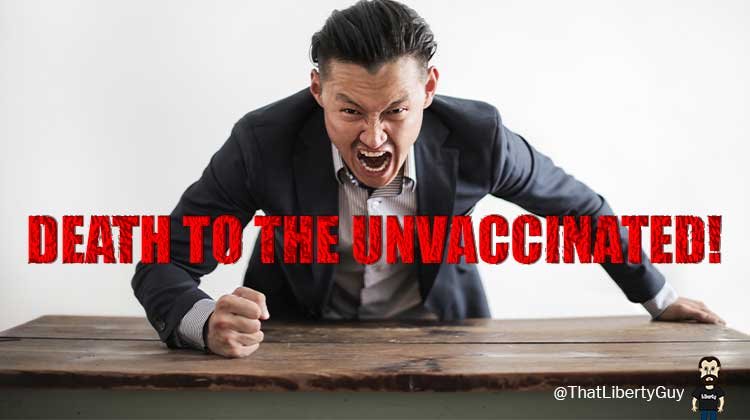 After two solid years of 24×7 COVID fear-porn, our hate-filled politicians and their vicious, spite-filled followers want one set of rules for vaccinated and a different set of rules for the unvaccinated or, as Prime Minister Justin Trudeau calls them, Canada’s racist and misogynist underbelly.

Where do Canada’s principled conservatives stand on Trudeau’s venomous diatribe?

I have no idea.

Both Erin O’Toole and the Conservative Party are Missing In Action on Trudeau’s vitriolic attack on those who disagree with the Blackface-In-Chief.

If silence equals compliance as it usually does, we can assume Erin O’Toole and the Conservative Party are fully on board with vilifying wide swaths of the Canadian mosaic, including First Nations, Blacks, Hispanics and other visible minorities, as I wrote about here.

Instead of figuring out how to live with COVID since it’s clearly not going away and can’t be stopped, both the federal government and various provinces continue to enforce lockdown measures that completely failed to stop the spread of the virus.

Repeating every failed measure to stop the spread of COVID over the past two years and adding even more draconian measures on top of them appears to be the path forward.

I don’t understand why they continue to push for 100% vaccination, including small children, when

Rochelle Walensky, Director, Centers for Disease Control: “Our vaccines are working exceptionally well. They continue to work well with ‘Delta’ with regard to severe illness and death, but what they can’t do anymore is prevent transmission.”

Dr. Balram Bhargava, Director-General of the Indian Council of Medical Research (ICMR): “All Covid vaccines, whether they are from India, Israel, US, Europe, UK or China, are primarily disease-modifying. They do not prevent infection.”

Government of Canada: “We’ve learned that fully vaccinated individuals can still be infected and transmit the COVID-19 virus.”

Now replace “unvaccinated” with the religious or visible minority of your choice.

Is this vile sentiment still valid?

Is it still acceptable?

No, of course not.

Governments love to divide citizens and pit the factions against each other. It allows those in power to implement their agenda with ease.

We lost our moral compass a long time ago, that much is crystal clear.

No, that’s not quite right.

We permitted governments to strip us of our moral compass and embraced the madness of it wholeheartedly.

A much bigger question is this: why do the majority of our population believe that living in fear, hatred and division is preferable to some other state? Any other state?

Does spewing their vitriol give them a feeling of moral superiority?

Does their fear of a virus absolve them from the requirement to think critically and act humanely?

Every one of these people, from the Prime Minister on down, should be utterly ashamed of themselves, their behaviour and their words.

Nor are they likely to repent any time soon.

That both sickens and appalls me.

I’ll leave the final word to Pastor John Chester, who expresses how I feel beautifully.