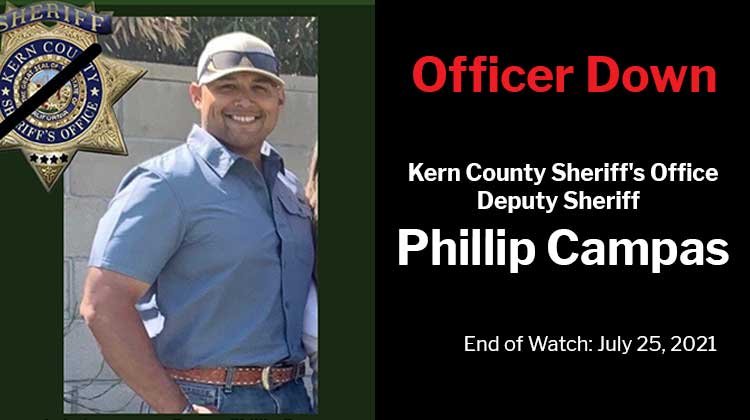 It was a domestic violence call that turned into a deadly standoff in rural southern California.

On July 25, 2021, Kern County Sheriff’s Office Deputy Sheriff Phillip Campas was shot and killed during a standoff that also wounded another police officer. When the primary suspect was finally shot and killed, the bodies of his wife and two children were found inside.

Five people were killed, including a sheriff’s deputy, in the wake of a domestic violence call and standoff that turned deadly in rural Southern California, authorities said Monday.

A 911 call was made at 1 p.m. Sunday reporting that an armed man who was the target a restraining order showed up at a home in Wasco, outside Bakersfield and about 140 miles north of downtown Los Angeles, Kern County Sheriff Donny Youngblood told reporters.

Screaming and shots could be heard on that 911 call and a woman fleeing the home at 1718 First St. told responding deputies that at least two people inside had been shot, Youngblood said.

The 41-year-old suspect then barricaded himself in the home and an hourslong standoff ensued.

After calling for backup and surrounding the home, Deputies Phillip Campas, 35, and Dizander Guerrero approached and were shot, Youngblood said.

Campas later died at the hospital while Guererro was treated and released. Two other deputies were wounded by flying shrapnel.

Then at 6:28 p.m., the suspect, armed with an AK-47 rifle and a handgun, got on to the home’s roof where he was killed by deputies, according to Youngblood.

Inside the house, deputies found three dead — a woman, 42, and two males, 24 and 17. The two male victims were sons of the shooter and the woman was their mother, the sheriff said.

“Had there not been other people in this house, we’d probably still be there doing what we do, and that’s wait until the suspect decides he’s had enough,” Youngblood said.

“We believed … that there was people that were alive in there that needed to be rescued and I think we were correct in that assumption.”

Deputy Sheriff Phillip Campas was a five-year veteran of the department and was a Marine veteran who served in Afghanistan.

He is survived by his wife and two young children.