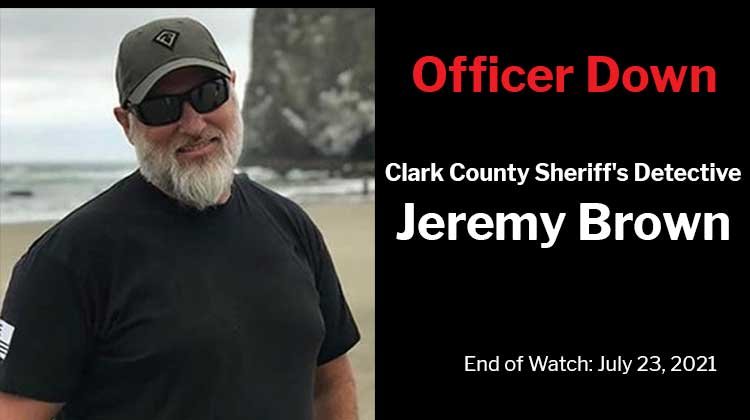 Clark County Sheriff’s Office Detective Jeremy Brown was shot and killed while conducting surveillance at an apartment complex in the 3500 block of Northeast 109th Avenue in Vancouver, Washington.

While he sat in his vehicle, he was approached by three people, one of whom murdered the detective.

Two suspects were arrested near the scene and the man who allegedly shot Detective Brown was arrested by members of the United States Marshals Service on July 25th, 2021, and now faces a first-degree aggravated murder charge.

On July 29th a public rally in honour of Detective Jeremy Brown was held at the Living Hope Church. This “Back the Blue Rally” was organized by tow truck driver Jake Beals, who said Brown always had his back whenever Beals was called to a crime scene to tow a vehicle.

“First and foremost, I’d like to say to Jeremy’s family, how sorry I am that this happened,” said Clark County Sheriff Chuck Atkins.

“I can only imagine what you’re going through, and I pray for each of you and that you have the support of those you love to get you through this difficult time — because this is something that will go on for a lifetime, this isn’t something that goes away,” Atkins said.

“I was amazed by the strength and courage of Jeremy’s wife, Jill,” Atkins said. “I can
see her as I’m saying this, so strong and also so much like her husband — family-oriented — and made it clear she wanted to be the one that personally contacted each of her kids so they didn’t hear this tragic news somewhere else.”

Detective Brown was due for a promotion which he now received posthumously.

Details of the incident

Around 6:52 p.m. Friday, Brown was inside his car doing surveillanceat the Pointe Apartments on NE 109th in east Vancouver, authorities said. Gunshots were heard and apartment complex residents around that time saw Brown had been shot in the chest while sitting in his vehicle.

At that same time, other units in the area were not able to reach Brown.

Brown was rushed to PeaceHealth Southwest for emergency treatment. He later died. He was 46.

Three people were later arrested in connection with the shooting. Abran Raya-Leon, 28, and 35-year-old Misty M. Raya, were arrested in the early hours of Saturday after an extensive search. The third suspect, Guillermo O. Raya was arrested Sunday in Salem by the U.S. Marshals Service Pacific Northwest Violent Offender task force and the Salem Police Department.

He is survived by his wife, Jill, and their children.