On July 8, 2021, Jared Lowndes – wanted for an outstanding warrant for his DNA – was shot and killed by RCMP in the parking lot of a Campbell River Tim Hortons restaurant after evading police after an earlier traffic stop.

From the RCMP’s version of events:

The BC RCMP has notified the Independent Investigations Office of British Columbia (IIO BC) of an incident in Campbell River that resulted in the death of a male and a RCMP Police Service Dog.

Just before 9 a.m. on July 8th, a member from the Campbell River RCMP attempted to stop a vehicle in relation to an outstanding warrant. It is reported that the vehicle failed to stop and fled the area. The member notified dispatch and its description was provided to other police officers in the area.

A short time later the suspect vehicle was located in a parking lot in the 2000 block of the South Island Highway in Campbell River. A police officer boxed in the vehicle and then a confrontation occurred between the suspect and the police officer, who had a Police Service Dog. During the interaction the Police Service Dog was stabbed and killed, and the suspect was shot and was pronounced deceased on scene. The Police Dog Handler was also treated for a knife wound. No other persons were injured.

Brian Sauvé, president of the National Police Federation that represents RCMP members, came under intense fire for his statements after Jared Lowndes’ death.

“If Mr. Lowndes had not evaded police, stabbed Police Service Dog Gator and injured an RCMP officer, and instead turned himself in to the Courts to comply with a warrant for weapons offenses, he could be alive today.”

I like and respect Mr. Sauvé for the work he is doing in general but, in this specific case, I think he’s standing on the wrong side of the fence.

Brian Sauvé’s comments are the only reference I can find to a warrant for weapons offences. Every other story talks about a warrant for DNA in a case where he was acquitted after a Crown witness admitted to lying on the stand.

At first blush it seems Mr. Sauve is 100% correct, but that assessment doesn’t survive even the most cursory scrutiny of the facts.

“The RCMP in Campbell River shot my son, after they started a pursuit that was not necessary,” said Laura Holland, Jared’s mother.

Given the facts outlined above regarding the case that spawned the arrest warrant, Ms. Holland’s assessment seems correct.

“An arrest warrant should not be a death sentence,” said Homalco First Nation Chief Darren Blaney.

“Officers have caused a lot of suffering all across this country, especially with Indigenous people. Too often, it’s our people that are paying the price for the lack of training of police officers.”

The fact the RCMP member released the attack dog almost immediately would appear to speak to either the high level of fear this RCMP member had of Jared Lowndes or this member’s lack of training in de-escalation of a tense situation.

My guess is it was a combination of both fear and a lack of training.

“He loved animals so much, he was vegan,” said Ashleaha Gardiner, a close friend of Jared’s. “I know in the bottom of my heart, he had to take the dog’s life in order to protect his own. He was trapped. He had nowhere to go. He feared for his own life.”

Not helping the situation between First Nations people and the rest of the Campbell River community is the outpouring of support for a dead police dog while a man lay dead in the parking lot for all the world to see.

Friend Lee Hackett went to the parking lot where his friend had been killed at 9:00 p.m., to bring an eagle feather and say goodbye, he said. He was shocked to see Jay’s body still lying on the ground, uncovered.

“This was 12 hours later, and my friend was still lying there on the ground. They had removed the sheet that was covering him. They had left his sweater up over his stomach. They didn’t have the decency to move it [his body]. To me it just felt disrespectful,” Hacket said.

“His face wasn’t recognizable, the cops had shot him in the face.”

RCMP members did not have the decency, the basic human dignity, to cover up the dead man so friends and family would not have to suffer with that sight for the rest of their lives.

Then the Campbell River Mirror published three stories about the dead service dog, which in the eyes of many, show the paper has more concern for a dog than an Indigenous man. 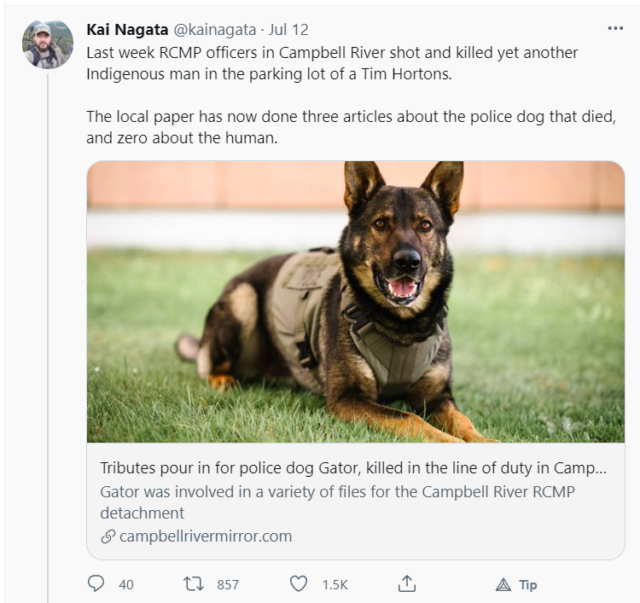 The RCMP issued two press releases about the fallen service dog as well, in what I characterize as ‘tone deaf’ to the loss of a human life.

No matter how well trained a dog may be, it is not more valuable than a human’s life.

The reason police service dogs exist is because they can be sent into dangerous situations where we, as society, don’t want to send another human – a police officer.

So yeah, I get it when Jared’s friends and family are repulsed by the mourning of a dog while demeaning the life of the man who was forced – by police – to kill that dog in defense of his own life.

The Tyee story noted this, as well:

On both Saturday and Sunday mornings, the family found their memorial had been dismantled. The signs were thrown face down on the ground and tributes were taken. The family rebuilt the shrines but found his daughters’ goodbye notes to their dad were torn.

“Expressing more concern for the dog than for the human’s life that was lost — I’m sure if it was their brother, their uncle, their nephew, they would see it differently,” said Homalco council member Preston Joseph.

Too Easy to Say Jared Lowndes ‘Deserved’ to Die?

If you only read the ‘official’ version of events, as put forward by RCMP and some media outlets, all you understand is a man died after stabbing a police dog to death and attempted to do the same to an RCMP member just doing his job.

That was my first impression after reading the RCMP press release and one news report.

As a lifelong proponent of personal responsibility, I’m ashamed to say my first thought was this:

Jared Lowndes was shot and killed, not because of an arrest warrant, not because of the color of his skin or ‘institutionalized racism’ in the RCMP, but because he attempted to injure and/or kill another human being.

Upon diving deeper into the story, it was obvious that conclusion was obscenely  incorrect.

If the RCMP’s past track record on openness and transparency stands true in this case, we’ll never know the answers to any of those questions.

Now, as a result of this RCMP member’s actions:

While he made poor choices in the past, just like so many of us did when we were young, Jared Lowndes had turned his life around and was doing his best to be a good father to his girls and a useful member of society.

Jared Lowndes was, by all the accounts I read, doing his best to turn his life around.

He quit drinking and was eight years sober when he was killed.

Will We Ever Know the Truth?

The Victoria Times-Colonist reports Lowndes was convicted of two firearms offences in December 2020 for charges dated 2013.

The RCMP has not publicly provided details about the warrant that sparked the incident. Sauvé refers to a warrant for weapons offences in his statement.

Court documents reveal a warrant for Lowndes was issued on March 21, 2021 for allegedly breaching his conditional sentence order.

In December 2020, Lowndes was convicted in Vancouver Supreme Court of two firearms offences dating back more than seven years to April 2013. He was convicted of possessing a restricted firearm with ammunition and contravening a regulation regarding storage or transportation of a firearm and restricted weapons.

That only tells one side of the story – the story that frames Jared Lowndes as a dangerous criminal on the run.

Here’s the other side of the story as told by Fay Blaney, Jared’s aunt.

The warrant was really old, an outstanding warrant for his DNA, and he was standing on sovereignty, saying they had no right to it.

It arose out of a domestic dispute with his common-law wife. She planted a gun in his possessions and called the police.

There was no need for his DNA after Lowndes’ common-law wife confessed. He was acquitted.

Rob Gordon, a criminology professor at Simon Fraser University, said the nature of the alleged breach of conditions is an important issue.

“Was the breach so egregious that it warranted the kind of intervention that actually occurred?”

Family members say the warrant was for DNA, not weapons offences or breaching a conditional sentence.

Who is telling the truth?

I have no idea, but given the RCMP’s track record with the truth, I lean toward the family’s side.

Hopefully time will give us the answer to that and so many more questions, but I won’t hold my breath on that account. History, sadly, gives me no reason to be hopeful.

I will happily crap all over Campbell River RCMP for their callous disregard for basic human dignity by leaving Jared Lowndes’ body lying in the parking lot for over 12 hours – uncovered so everyone could see.

That is well beyond ‘disrespectful.’

It’s disgusting at every level, and the Campbell River OIC should be hauled on the carpet and be forced to answer for the actions of one of their underlings.

Will we ever learn the truth about how and why Jared Lowndes died?

I wish I could say I am cautiously optimistic.

I’ve researched and written about too many cases where the RCMP does everything in its power to protect RCMP Members who screwed up.

One look at the RCMP’s gymnastics to avoid answering serious questions about their screwup in the Nova Scotia mass murderer case and you’ll understand why I have so little faith that justice will be served in Campbell River RCMP’s shooting of Jared Lowndes.