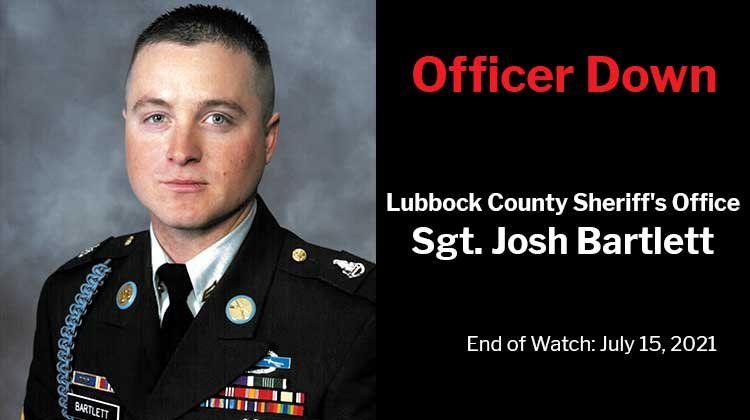 The Lubbock County Sheriff’s Office is mourning the loss of one of our own, tonight, SWAT Commander Sergeant Josh Bartlett.

The Lubbock County Sheriff’s Office SWAT Team responded to the 1100 block of 10th Street in Levelland at 2:15 p.m. on Thursday, July 15th to assist the Levelland Police Department for reports of a barricaded subject with reports of shots fired.

Shortly after arrival, gunfire was exchanged and Sgt. Bartlett was shot. Sgt. Bartlett was transported to Covenant Medical Center in Levelland with life-threatening injuries where he was later pronounced deceased.

We appreciate the public’s support during this difficult time and ask for continued prayers for his family, both blood and blue.

“Denise and I join the City of Lubbock and all Lubbock citizens mourning the tragic and senseless death of Commander Sgt. Josh Bartlett.

The Lubbock Police Department SWAT Team and negotiators remain engaged with local and state authorities in the ongoing situation in Levelland.

This senseless killing serves as a stark reminder of the danger our first responders face everyday.

Our thoughts and prayers are with the Bartlett family and the Lubbock County Sheriff’s Department family.”

Sgt. Joshua Bartlett was a 9 year veteran of the Lubbock County Sheriff’s Office and was the Assistant Commander of the SWAT team.

In addition to his law enforcement service, Sgt. Bartlett was also a U.S. Army combat wounded veteran who served two tours in Iraq as an Infantryman with the 10th Mountain Division.

During his military service Joshua Bartlett received the following awards:

Sgt. Bartlett is survived by his beautiful wife of 18 years, Rebecca, and their three sons.

The family just celebrated his youngest son’s teenage birthday two days before he was murdered.

If you are able, please donate generously to the memorial GoFundMe page for Sgt. Bartlett’s family: