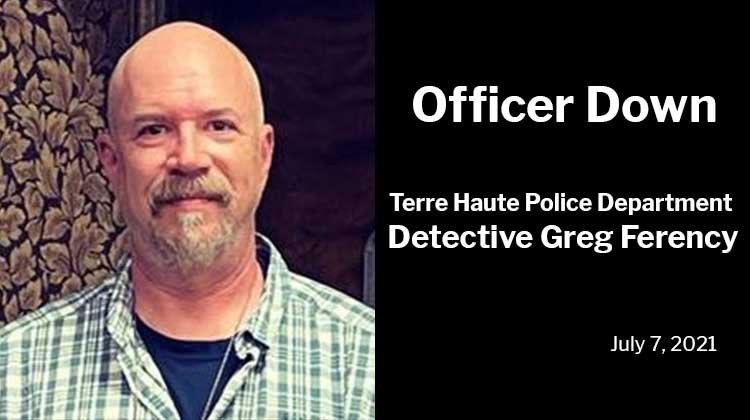 Detective Ferency, a 30-year veteran of the Terre Haute Police Department, was assigned to the FBI Task Force and worked there since 2010.

At this point it is not known why the as-yet unidentified murderer singled out and murdered Detective Ferency.

Detective Ferency’s murderer was wounded by shots from one or more FBI agents and drove himself to hospital where he was arrested and remains under guard.

“We lost a true public servant today,” said Douglas G. Carter, Superintendent of the Indiana State Police. He went on to say that attacks on law enforcement officers were becoming more common and that “it’s not a good time to be a police officer in America.”

“The tragic events that unfolded today are senseless. Our heart breaks for Detective Greg Ferency’s family, loved ones and those who served with him every day protecting the residents of the Wabash Valley,” Governor Eric Holcomb said on Twitter.

“Janet and I are thinking of the Terre Haute Police Department, the community and Detective Ferency’s family as I know they will be steadfast in honoring his life, service and dedication to the residents of Vigo County.”

Greg Ferency is also the author of “Narc Ops: A Look Inside Drug Enforcement” published in 2003.

From the book’s description:

Greg Ferency is a police officer for the Terre Haute Police Department (Indiana).  His assignments have included a county-wide Drug Task Force. He has extensive experience in drug related crimes as both an investigator and undercover officer. Greg Ferency has specialized training and experience in methamphetamine related investigations.

He has certifications from the DEA Clandestine Laboratory Enforcement Team in the area of Basic, Site Safety and Tactical Operations. Greg has been at the scene of over 550 methamphetamine lab scenes as both lead investigator and site safety officer since 1999. He is a court certified expert in methamphetamine and its associated clandestine labs. Greg has trained law enforcement, civilian groups, educational system employees, medical staff and correctional personnel in methamphetamine and other drug related topics.

More details of his life and career can be found on Heavy.com‘s tribute page for the fallen detective.

Joe Hren: A tragic week in Terre Haute – I watched some of the funeral services and the procession yesterday of slain Detective Greg Ferency, just no words.

Mayor Bennett: No, there really isn’t. It’s our third police officer killed in the last 10 years here. And it’s just kind of surreal. You know, when I heard about this last week, I was actually sitting here at my desk and saw the fire dispatch come across my phone. And so I walked down the back of the building, just to see what was going on. And as I got closer to the actual scene, and they said it was an officer down, man, I was just like, no, not again.

As a community. I just, it was just awful. Detective Ferency, he was an exceptional police officer, he really was – he was pretty unique. He was really good at what he did – always been kind of involved in that Drug Task Force kind of stuff for us. But, he wrote a book, he was doing a lot of in service training for police officers and local community entities, doing a lot of things recently with children trafficking and some terrorism stuff. So he was just a huge asset.

And he was just kind of a very special guy and put a lot of bad people away and you hear lots of stories about people that he’d arrested. And I mentioned one yesterday in funeral service that a girl, 18 years ago, he arrested her, and she’s been clean ever since. Greg had such a wide ranging impact. And, you know, it’s just tragic.