Investigative Reporter Paul Palango is one of those rare individuals, one of those old-school reporters, for whom the truth still matters. Unfortunately for the RCMP, the truth he uncovers may well be the organization’s undoing.

Lest you fall into the RCMP-baited trap that Palango has a hate-on for the RCMP, allow me to quote a couple paragraphs from the description of his second book, “The Last Guardians: The Crisis in the RCMP – and Canada“:

In 1997, journalist Paul Palango, who had already written about the RCMP in the bestselling Above the Law, set out to take another look at the force for Maclean’s magazine. In the course of the article, entitled “Why the Mounties Can’t Get Their Man,” he quoted Commissioner Philip Murray, who lamented that Canada was heading towards a two-tier system of policing, with private investigative and security services dealing with white-collar crimes, because the public police force no longer has the resources – of time, manpower, or money – to do so.

Palango wanted to try to show how and why the RCMP had reached this point, and what the implications might be for society as a whole. This book is the result.

With the blessings of the force, he set out across the country, interviewing highly placed officers – past and present – watching cadets train at the force’s historic Regina headquarters, going on night patrol with constables both in a remote Manitoba community and in suburban Burnaby, B.C., checking out the new drive to community policing – and some of the communities it serves. Members of the RCMP co-operated with him everywhere he went – and talked freely to him.

As a result of researching and writing The Last Guardians, Paul Palango probably cultivated more sources inside the RCMP than any other reporter in history. It is probably some of these same sources who are funnelling confidential information to Paul Palango about the Nova Scotia mass murderer today, much to the dismay of RCMP brass.

“If you’re going to label me a conspiracy theorist, so be it, because I’m proving my story as I go along.”

Palango made that statement in response to the RCMP’s attempt to ‘shoot the messenger’ over the inconvenient truths Palango dug up, beginning the morning after the Nova Scotia murder spree ended.

He knew something didn’t smell right from the start. The RCMP’s actions simply didn’t make sense, and any explanations they offered raised more questions than they answered.

So Palango went to work and, over the course of his continuing investigation, has broken almost every major story-line in the Nova Scotia mass murder case.

Palago’s latest scoop was obtaining copies of three 911 calls which prove the RCMP lied when they claimed they didn’t know who the killer was, what he was wearing or what he was driving until the morning of April 9th.

The three 911 calls clearly show the RCMP knew the killer’s name and occupation, that he was driving an RCMP cruiser and wearing an RCMP uniform – all information the RCMP claimed they didn’t learn until the following morning when the killer’s girlfriend supposedly crawled out of the woods.

Those 911 calls and their transcripts, published by Frank Magazine on June 2, 2021, sparked outrage from the head of the RCMP in Nova Scotia, Asst. Commissioner Lee Bergerman.

Rather than deal head-on with the fact the RCMP lied to Canadians, Asst. Commissioner Bergerman opted for a game of ‘Shoot the Messenger’ instead. 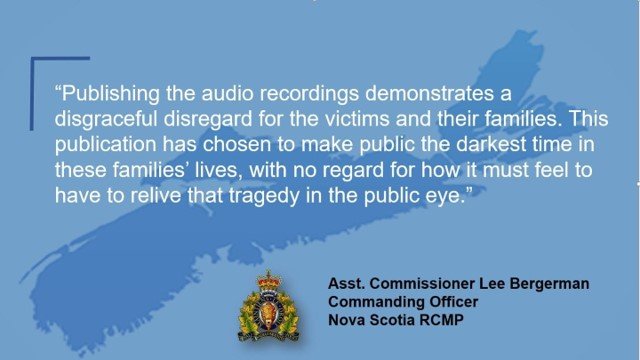 My position is very clear.

Since the first reports of gunshots at Portapique Beach on April 18, 2020, the response by the RCMP has been stranger than strange.

The Mounties arrived on scene in time to potentially trap the killer in the community and perhaps prevent at least the last five murders.

Instead, Wortman got past them, had a rest in Debert, and then was allowed to roam around Nova Scotia, killing nine more people.

Lisa Banfield says she hid in the woods for about eight hours on a blistering cold night. She went to Leon Joudrey’s house at 6:34 a.m. He has told many reporters and the police that he did not believe her story.

Actually, the RCMP and the Crown blacked out the first description of those injuries. The word they blacked out was “minor,” which was consistent with what Joudrey said.

You suggest that I am treacherous and not trusted by the mainstream media because of a story you highlighted in Maclean’s magazine from last June.

For that story we obtained a copy of the RCMP’s undercover manual. Among other things described in that document are the procedures the force should use in a blown undercover operation.

The actions of the RCMP before, during and after the weekend of April 18-19 largely conform to the procedures described. I’ve spent the past eight months trying to disprove that there was an undercover operation in Portapique — to no avail.

The more I investigate the more it appears that someone in Wortman’s circle appeared to have a special relationship with the authorities — be they the RCMP, Halifax Police or even CSIS. Nothing is conclusive, but that doesn’t mean you just give up because it’s too difficult. That isn’t in my DNA.

My role as a journalist is to act as a disinterested investigator whose duty it is to uncover the truth and show no fear or favouritism to anyone. Like a pathologist, I am a friend of the dead. As Joseph Pulitizer once put it: “Newspapers should have no friends.”

I am not here to be liked. I am not in it for the money, although some uninformed critics have wrongly accused me of being so. I am here to be the agent of the story and to do what it dictates that I must do.

As for Ms. Banfield, I believe it is in the public interest that her story be fully examined because she was apparently the last person to see Wortman before he went on his rampage.

You say Maclean’s dropped me because I was unreliable.

I can assure you that is not what happened.

I withdrew my story and chose to run it in Frank, as written.

That same story generated a number of leads which lead to the discovery of the Pictou County analog recordings from the weekend in question.

Stories about what was on those tapes brought even more stories and leads.

That’s what good journalists do.

A Former Colleague Defends Him

For full disclosure, I have known Paul Palango for nearly fifty years.

We were colleagues at the Hamilton Spectator and the Toronto Sun. We were friendly competitors when he worked at the Globe and Mail and I at the Toronto Star.

I was his editor when he was a columnist-at-large at Eye Weekly magazine in the early ‘90s. It fell to me to re-examine and test his reporting whenever he ruffled feathers. Sometimes he ruffled so many feathers the bird was denuded.

In every case I investigated, the veracity of his reporting was beyond reproach.

He was relentless in pursuing dirty birds down winding paths until he got to the truth.

There is something that needs to be emphasised, particularly for those who haven’t read his three authoritative books examining RCMP practices.

Palango has nothing but respect for the cop on the street.

As an investigative reporter and editor, he thinks like a cop. He could have been a cop himself, and a damn good one. He worked very effectively for a time as a fraud investigator for a large insurance firm. He loved it.

His brother, daughter and son-in-law have all worked as corrections officers.

It’s not cops he dislikes. It’s the nepotism, cronyism and stupidity of far too many in the RCMP’s senior ranks. The attitude that once you’re wearing the white-shirt, there’s little chance you will pay for your mistakes. There will always be plenty of constables, corporals and sergeants to take the fall.

I would trust him with my own eulogy. Your obfuscation and pathetic attempt at libel chill will not faze him.

Paul Palango is a tenacious investigative reporter, and God bless him for it.

I, for one, am incredibly grateful to Paul Palango for his determination to expose the truth, no matter how ugly that truth may be for RCMP brass.

What I appreciate about his work is he can, through his plethora of contacts inside the RCMP, discover information that no Access to Information Program Request (ATIP) will ever uncover.

Denial is a core element of the RCMP’s culture of secrecy. It’s this culture that will ultimately be the end of them.

My own experience with filing ATIP requests with the RCMP is that, even for the most benign and innocuous information, their answer is “No.”  Once formal complaints are lodged with the Privacy and Information Commissioner, they will begrudgingly release some, but often not all the information requested.

Paul Palango knows he’s on the right track and he will not stop until he gets to the truth.

The trouble for the RCMP brass is they may not survive the scandal once Paul Palango fully uncovers it.

Does Anyone Want the Truth?

He began investigating the SwissAir Flight 111 crash reluctantly in 2009 at the behest of an RCMP contact. Palango was extremely sceptical at the start, but the more he learned, the less sceptical he became.

In a November 8, 2011, interview on the The Mark Hasiuk Show about SwissAir Flight 111, Palango shared how he was horrified to learn that all official documents were stripped of any reference to possible bomb or incendiary device materials.

“The TSB and RCMP took steps to have any references to this material [unaccounted-for magnesium levels and other materials possibly from a bomb or incendiary device] edited out of police notes, which is against the law, and pressure was brought to bear on government scientists in Ottawa working independently on the case to not report what they had found.”

“Who is actually looking out for the truth here?” Palagno asked then.

It’s the same question Paul Palango is asking now about the Nova Scotia mass murderer and the actions taken by the RCMP before, during and after the killing spree.

While RCMP Assistant Commissioner Lee Bergerman is doing her best to hide and obfuscate the truth, my bet is on Paul Palango because the closer he gets to the truth, the closer early retirement comes for her.