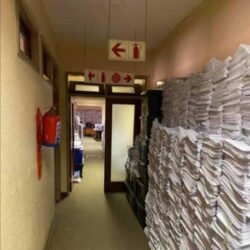 Canada’s failed Long Gun Registry was an expensive and useless exercise that did not help solve a single crime according to police, but at least ‘the trains ran on time’ – to butcher the analogy.

The same cannot be said for South Africa’s Central Firearms Registry, where backlogs for both licenses and amnesties are piled six feet high throughout a building that’s been declared unsafe.

And that’s not even the worst of it.

Corrupt police officials issue firearms permits to criminals willing to pay while honest citizens’ applications waste away in the corridors and offices of the Central Firearms Registry’s decrepit old building.

The opening paragraphs of a November 2020 report into the ‘systemic corruption’ inside South Africa’s Central Firearms Registry pulls no punches. [read PDF report]

The assassination in September 2020 of a South African police detective investigating a guns-to-gangs syndicate involving high-ranking police officers and the police firearms registry has brought into focus the ongoing links between corrupt elements of the South African police and the criminal underworld, and the fraudulent channels through which police-issue firearms have been sold to criminals.

It has also reinforced how systemic corruption at the firearms registry has been an ongoing problem that has subverted the aims of South Africa’s Firearms Control Act – legislation designed to prevent the dissemination of firearms in the country, and which, ironically, is implemented by the registry.

Lieutenant-Colonel Charl Kinnear, a section commander at the Western Cape Anti-Gang Unit, was murdered outside his home in Bishop Lavis, a suburb of Cape Town, on September 18, 2020.

Kinnear was investigating a guns-to-gangs syndicate that involved key underworld figures, including Nafiz Modack. According to an affidavit drawn up by Kinnear, these individuals were colluding with certain officers at police stations, as well as their colleagues at South Africa’s Central Firearms Registry, to obtain firearm licences “unlawfully and irregularly.”

Police officers and bureaucrats from the Central Firearms Registry were among those arrested as part of this investigation.

“Over the last decade, there have been numerous allegations, reports and cases of corruption involving CFR officials and their counterparts at the local police station level. The sheer volume of allegations, coupled with the involvement of police officers at different levels, would imply that the problem of corruption at the CFR is an ongoing problem and one that is systemic in nature.”

Ongoing systemic corruption inside the Central Firearms Registry aside, the abject failure of the program to process applications leaves South African gun owners at the mercy of those useless bureaucrats. 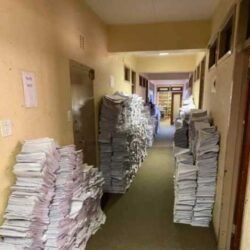 “Files piled up in corridors on every floor due to a lack of space, the poor use of IT systems, staff shortages, and a building which has been declared unsafe, are all contributing factors to the chaos we saw at the CFR. Staff morale is at an all-time low under these conditions, resulting in rock bottom levels of productivity.

“Thousands of South Africans waiting for their firearm licences are left vulnerable by the failures of the CFR. This is unacceptable.”

As failing government institutions worldwide have done since the ‘pandemic’ began, the South African government lept at the opportunity to blame COVID-19 for the failure of its bureaucrats to deal with the massive delays.

Police spokesperson Brigadier Vishnu Naidoo confirmed that firearm license applications and amnesty applications to the Central Firearm Registry have been delayed, mainly due to the COVID-19 pandemic.

“This situation has resulted in unexpected consequences on the service delivery front.

“It is common knowledge this virus has been the cause for employees to frequently self-isolate after having tested positive or come in contact with persons who tested positive for the virus, and the SAPS had not been immune to this.

“In the event a positive case is detected, buildings are also evacuated for purposes of decontamination, adding to the delays.”

Naidoo said applications for licences, in respect of surrendered firearms during the amnesty period, compounded the situation after the total number of firearm licence applications increased by more than 80% for the duration of the amnesty.

“Applications for licences, in respect of surrendered firearms, require an entirely different process to that of a normal renewal of licence, which inevitably prolongs the turnaround time for their finalisation.

“In light of this situation, the turnaround time for a firearm licence application is taking more than the normal 90 working days.”

The production of Firearms Licence cards was stopped on Monday March 16, 2020 as a result of the closure of our processing site located in Miramichi, NB.

The production of Firearms Licence cards, which are produced at our processing site located in Miramichi, NB, cannot be performed remotely.

The Canadian Firearms Program has recently initiated the production of licence cards, however, clients may still experience delays due to reduced capacity in our processing site as a result of COVID-19.

The Canadian Firearms Program is working diligently to address workloads that may have been impacted as the result of COVID-19.

Yes, the Long Gun Registry was useless and grossly expensive but so far as we know today, the RCMP Canadian Firearms Program is not selling licenses to the highest bidder and background checks are still [mostly] required.