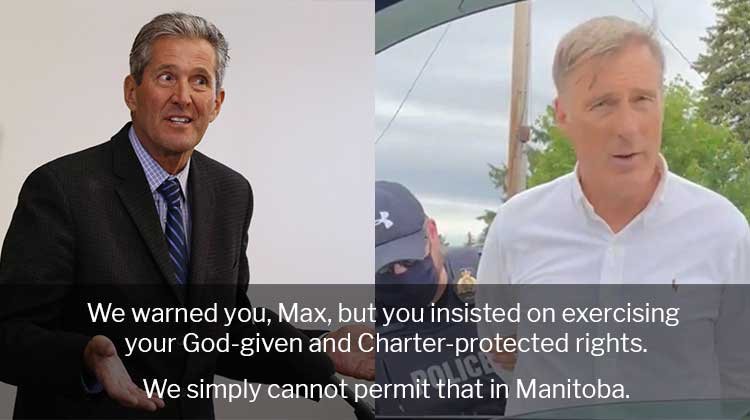 On Saturday, June 11, 2021, Manitoba RCMP arrested and detained Maxime Bernier, the leader of the People’s Party of Canada (PPC) for daring to use his Charter-protected rights to freedom of mobility, freedom of assembly and freedom of speech.

The Justice Centre for Constitutional Freedoms, who represents PPC leader in court, said:

The Justice Centre will be appearing in Court on Mr. Bernier’s behalf to respond to charges that were laid under Covid public health orders, which are already the subject of a legal challenge in Manitoba as to their constitutionality.

While most of the world is open for business, Manitoba remains one of the few places in the developed world that continues to suffer under draconian lockdowns.

“I knew I risked being arrested in Manitoba after the threatening letter I got from the province’s public health official,” Bernier said in a written statement published on Twitter.

“But it’s still always a shock when it happens, when the police treat you like a criminal and handcuff you because you dared talk to a dozen people outdoors in a small village half an hour before.”

“It’s crazy to see this happen in Canada,” Bernier continued. “Meanwhile, politicians from Trudeau to Kenney to various ministers get caught flouting regulations and nothing happens. It’s only ordinary people who pay for not following these tyrannical rules, and politicians like me who openly fight them. The hypocrisy is astounding.”

“The arrest and detention of Mr. Bernier for supposed ‘health offences’ is an exclamation point on the continued outrageous oppression of Manitobans by the Pallister government. Few, if any, other places on the planet are still locked down as tyrannically as Manitoba,” said John Carpay, layer and President of the Justice Centre.

Meanwhile, Manitoba Premier Brian Pallister will create a two-tiered society – one where ‘fully-vaccinated’ individuals can do as they please while the rights of non-vaccinated individuals will continue to be trampled mercilessly.

Fully immunized Manitobans will now be able to travel without having to self-isolate for two weeks upon return with a new, secure immunization card that will be available to people two weeks after they have received both doses of a COVID-19 vaccine, tyrannical Premier Brian Pallister announced on June 8th.

To be eligible to receive an immunization card, Manitobans must:

“We are all eager to be able to travel, visit family and friends, and enjoy the many freedoms we have taken for granted and missed these many months,” Pallister said.

“Getting vaccinated and following public health orders to protect each other and our health-care system is the fastest way to save our summer and get back to doing some of the things we love and see the people we miss.”

We can do that right now, today, if only a single elected Canadian politician existed had the backbone to stop the madness.

What About the Three Elephants in the Room?

Pallister’s propaganda (and every other Canadian premier and health official) all refuse to address the three elephants in the room – South Dakota, Florida and Texas.

South Dakota Governor Kristi Noem refused to shut down her state and called COVID lockdowns “usesless” from the start.

In April 2020, just as COVID fear was overtaking the world, Governor Noem reminded people of this pesky little document she swore an oath to uphold, even though it made her “Public Enemy #1” for the left.

“I had a real honest conversation with the people in our state. I told them I took an oath to uphold the Constitution of our state, of South Dakota,” said Noem, who has not issued a stay-at-home order amid the coronavirus outbreak.

“I took an oath when I was in Congress, obviously, to uphold the constitution of the United States,” she said. “I believe in our freedoms and liberties. What I’ve seen across the country is so many people give up their liberties for just a little bit of security, and they don’t have to do that.”

By October, Governor Noem admitted standing by the Constitution took its toll, but she never wavered.

“As you all might imagine, these last seven months have been quite lonely at times. But earlier this week, one very prominent national reporter sent me a note that said, ‘Governor, if you hadn’t stood against lockdowns, we’d have no proof of just how useless they really have been.'”

She went on to say that “the people of South Dakota can be trusted to make good decisions. We have common sense. That’s why people want to live here and that’s why I love living here.”

Florida Governor Ron DeSantis dropped all COVID restrictions last September. Despite the prophets of doom from the president to almost mainstream media outlet in the nation, Florida did not succumb to the virus. Instead, the opposite happened. Florida is thriving.

And Governor DeSantis didn’t stop there.

“It’s completely unacceptable for either the government or the private sector to impose upon you the requirement that you show proof of vaccine to just simply be able to participate in normal society,” DeSantis said at his March 29th press conference.

On April 2, 2021 DeSantis issued an Executive Order banning COVID passports in the State of Florida. (Read the order here)

On April 30th the Florida House and Senate approved Senate Bill (SB) 2006, which DeSantis signed into law on May 3rd.

“Over the last year we’ve avoided protracted lockdowns and school closures in Florida because I have refused to take the same approach as other lockdown Governors. This legislation ensures that legal safeguards are in place so that local governments cannot arbitrarily close our schools or businesses,” said Governor Ron DeSantis.

“In Florida, your personal choice regarding vaccinations will be protected and no business or government entity will be able to deny you services based on your decision. I’d like to thank President Simpson, Speaker Sprowls and the Florida Legislature for getting this legislation got across the finish line.”

“Effective next Wednesday, all businesses of any type are allowed to open 100 percent. That includes any type of entity in Texas. Also, I am ending the statewide mask mandate,” Governor Abbott said at a press conference.

Just as they did with Florida, the usual naysayers screamed ‘The sky is falling” as loud as they could in a desperate plea to get anyone to listen.

But they faced an insurmountable obstacle: the facts.

Texas did not suffer a ‘massive surge’ in COVID cases. In fact, in the four weeks after all COVID restrictions were removed, Texas did not have a single COVID-related death. Not one.

If anyone can explain to me in rational terms why Canada must continue to destroy jobs, lives and families over COVID, I’m all ears.

Until then, I cite Florida and Texas as evidence of why we must stop the madness immediately.

* 0 Covid related deaths–the only time that’s happened since data was tracked in March, 2020.

* the fewest Covid cases in over 13 months

* the lowest Covid hospitalizations in 11 months.