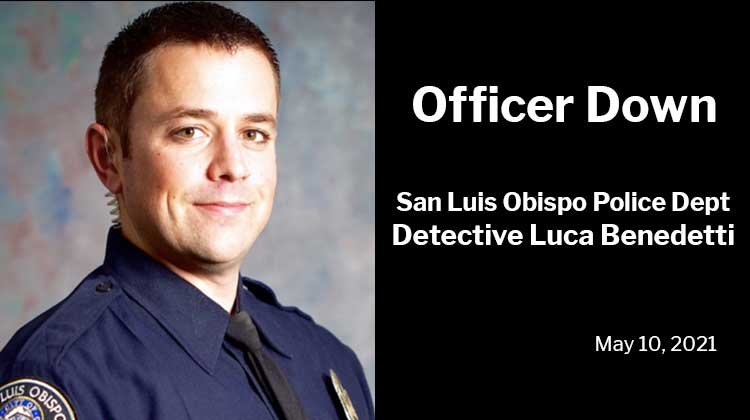 Detective Benedetti and Detective Steve Orozco identified themselves as they approached the residence with three other officers.

Hearing no response to their query, including a request to enter the home, Detectives Benedetti and Orozco entered the residence.

The suspect, hiding inside, opened fire on the two detectives as soon as they entered the home. Both were hit, and at least one of them returned fire and injured the suspect.

Detective Luca Benedetti was transported to a nearby hospital where he succumbed to his injuries.

Detective Steve Orozco was also transported to hospital and released a short time later. He is expected to make a full physical recovery from his injuries.

“Our community is heartbroken,” said Mayor Heidi Harmon. “Detective Benedetti loved this City and bravely gave his life so that we could live in peace and safety. Luca’s children have lost their father so we could be safe. We will hold Detective Benedetti and his family in our hearts forever.”

“I had the distinct pleasure of working with Luca over the past 9 years,” Acting SLO Police Chief Brian Amoroso said.

“He was a dedicated officer, a talented detective, a proud member of the San Luis Obispo Regional SWAT Team, and most importantly, a loving husband and father.”

“The entire SLOPD is grateful for the outpouring of support we have received from the community. We are also grateful for the continued support from our Central Coast law enforcement partners and beyond. The San Luis Obispo County Sheriff’s Office along with allied law enforcement agencies in the county will respond to calls for service in the City of San Luis Obispo during the coming days while members of the SLOPD grieve and work through this tragedy,” he said.

“I was impressed then with how calm, professional, and caring he was in performing his duties as a police officer. I was not surprised when several years later, in November of 2012, to hear of him helping a woman in labor deliver her baby in the Atascadero police department parking lot.”

Detective Benedetti is survived by his wife and two daughters.

Edward Zamora Giron, the gutless coward who murdered Detective Benedetti, took his own life instead of facing the consequences for his heinous actions here on earth. Since God hates cowards [see Deuteronomy 31:6 and Revelation 21:8], I presume Mr. Giron is experiencing the unrelenting heat and eternal torment he so richly deserves in that fiery place down below.