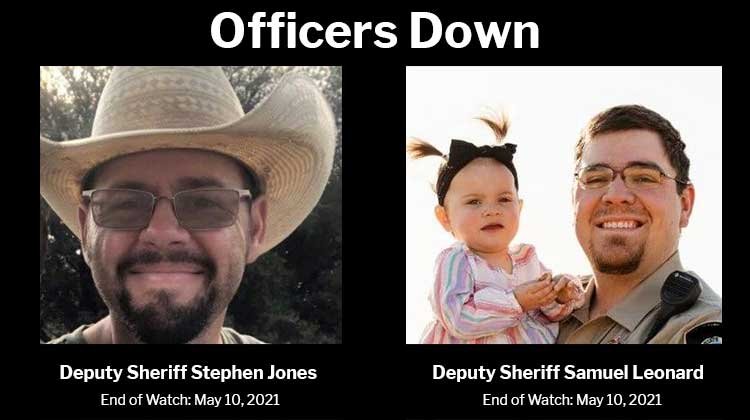 On May 10, 2021, Concho County Sheriff’s Office Deputy Sheriff Samuel Leonard, Deputy Sheriff Stephen Jones and an unidentified in Eden, Texas, city employee responded to a disturbance call about a dog. When they arrived the got into an altercation with Jeffrey Nicholas.

The deputies and the city worker approached Nicholas’ vehicle and asked about the dog situation. Nicholas became agitated, stating the dogs were not his, and that he was being harassed. Instead of getting out of his vehicle to talk, the suspect opened fire on officers without warning.

Both deputy sheriffs were killed and the Eden City employee was critically wounded.

Jeffrey Nicholas then barricaded himself inside his home but a neighbour and Eden City Mayor Pete Torres both tried to talk him out. Mayor Torres lives around the corner from the double-murderer.

After about 30 minutes Jeffrey Nicholas exited his home peacefully. He was immediately arrested and charged with two counts of capital murder.

Texas Governor Greg Abbott expressed his sympathy to the loved ones of the fallen deputies in a statement published on Twitter.

“Our hearts go out to the family & friends of 2 Concho County Sheriff’s deputies who were killed in the line of duty last night. This terrible loss is a solemn reminder of the risks our brave law enforcement officers face while protecting our communities.”

The Concho County Sheriff’s Office is collecting donations for the families of both deputies.

If anyone is wanting to send anything to the families of Stephen Jones or Samuel Leonard, please send items to PO Box 67 in Paint Rock or bring by the Sheriff Office in Eden and we will make sure the families receive them.

Accounts are being set up at both Eden State Bank and Paint Rock Bank to benefit both families. Thank you!

Deputy Sheriff Stephen Jones leaves behind his wife and five children. His sixteenth wedding anniversary was in two weeks.

Deputy Sheriff Samuel Leonard leaves behind his wife Morgan and their daughter Magnolia.