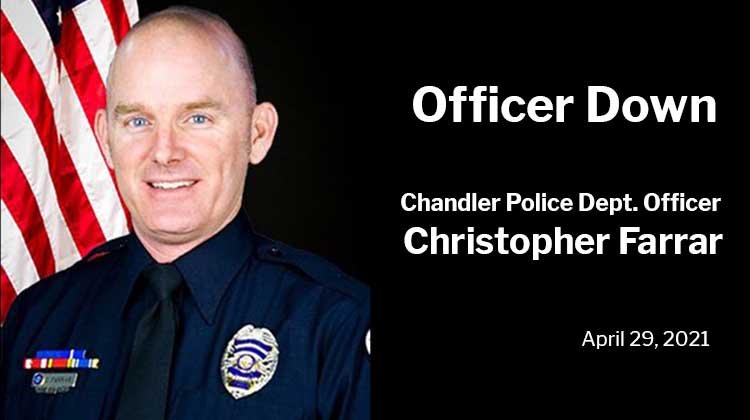 On April 29, 2021, Chandler Police Department Officer Christopher Farrar was struck and killed by a violent moron driving a stolen vehicle.

At about 10pm, Pinal County Sheriff’s Office deputy pursued a truck and driver, later identified as Jonathon Altland, as he shot at the deputy’s vehicle. They chased Altland into Chandler, where he rammed a gate at Chandler Regional Airport and then crashed near the Val Vista Drive ramp. The chase ended when Altland finally crashed through a fence surrounding a Gilbert Ford dealership.

While the vehicle chase was over, Jonathon Altland had no intention of surrendering.

He fled into the dealership where he stole a second vehicle from inside the dealership, but not before shooting at a bunch of people, injuring but not killing them. Altland then crashed that stolen vehicle through a closed service bay door.

Three Pinal County and four DPS officers shot at Altland as he attempted to run them over after he exited the building.

Altland then hit Farrar with the stolen car and drove into a parked car that hit Officer Rico Aranda.

Jonathon Altland was arrested and charged with First Degree murder, the first of many more charges to come.

Not Scheduled To Work

Christopher Farrar was an 18-year veteran of the Chandler Police Department. He is survived by his mother and father, brother, sister, daughter, two sons and grandchild.

Christopher Farrar served in various roles – patrol division and bicycle team – and most recently the K-9 unit. He also received several awards and numerous accolades and commendations from the community throughout his career.

“He had a big heart, he cared about the job he did, the people he did it for, the community he served. He was proud to work with people in the department, was there willing to step up,” a fellow officer said.

Perhaps the most heart-breaking thing is Officer Farrar wasn’t scheduled to work that day. He was filling in for another officer.