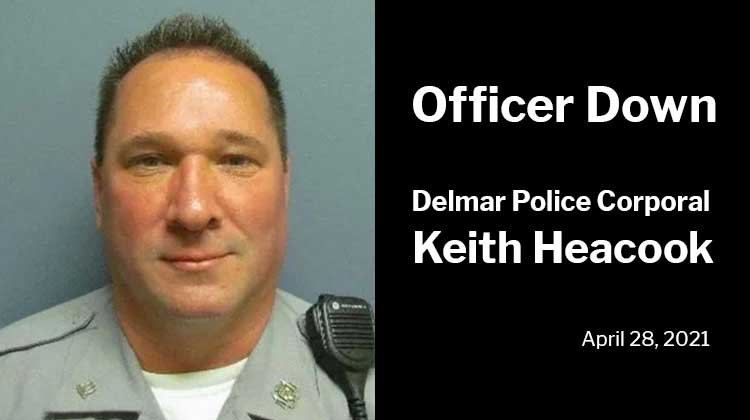 On April 28, 2021, Delmar Police Department Corporal Keith Heacook passed away from injuries suffered when he responded to a 911 call from an elderly couple being attacked by a stranger.

“Our community, my department, his family — we all mourn,” Delmar Police Chief Ivan Barkley said.

When Cpl. Heacook arrived at the scene, 30-year-old career criminal Randon Wilkerson abandoned his assault on the 73-year-old man and his 76-year-old wife and attacked Cpl. Heacook instead.  After overpowering and beating Cpl. Heacook unconscious, this degenerate then repeatedly head-stomped him, according to witnesses.

When dispatch could not raise Cpl Heacook they dispatched additional units to the scene where they discovered the broken body of their fellow officer.

“These are the worst moments any of us can imagine: mourning the loss of a member of our law enforcement family. Cpl. Keith Heacook served his Department and his community honorably and faithfully for more than two decades — a family man, a public servant, and a protector of his community until his final days,” said Delaware Attorney General Kathy Jennings.

“The man who stole him from his family and from his community has been arrested, and mark my words: he will be prosecuted to the fullest extent of the law. He will be held accountable for his heinous crimes against Cpl. Heacook, against the elderly couple he viciously assaulted, and against Delmar and our state,” Jennings said

Corporal Keith Heacook, a 22-year veteran of the Delmar Police Department, is survived by his wife and 12-year-old son.

Heacook’s death shines a massive spotlight on the dangers of police officers responding to violence calls alone. Had another officer been dispatched with Cpl. Heacook, it’s entirely probable he would still be alive today.

On May 5, 2021, the Community Foundation of the Eastern Shore announced the establishment of the Corporal Keith Heacook Memorial Scholarship. The endowment will award a scholarship each year to a Delmar High School graduate who will pursue a career in public service.

“Keith’s service and sacrifice will be honored year after year, serving as a reminder of his legacy,” says Julie Parrish, who helped establish the scholarship fund. “We hope the scholarship will inspire young men and women to serve their community, as Keith faithfully served his.”

To make a tax-deductible contribution to the scholarship fund visit CFES.org/donate and select “Corporal Keith Heacook Memorial Scholarship” in the drop-down menu. The scholarship fund is managed by the Community Foundation of the Eastern Shore.

If you would like to support this fine effort, please donate here: https://givesendgo.com/Keith

“The local law firm of Procino – Wells & Woodland are being retained on Monday to start the trust account for Matthew Heacook.  Prominent local Realtor, Pam Price and Auctioneer Doug Marshall will serve as co-trustees.  We are honoring the community’s wishes by starting this trust and all money raised are being deposited into an account at the Bank of Delmarva.  The Account name is “The Community for Keith Heacook”  You can trust and rest assured these moneys are being handled by the law firm and trustees!