Every year the Lethbridge Police reviews all Subject Behavior Officer Response (SBOR) Reports to determine any trends or patterns that may impact training needs, equipment requirements, and any changes to the service policy or procedures.

The 2020 evaluation 99% shows of all Lethbridge Police calls were resolved without the use of force.

Notably, only 4% of the subjects encountered were perceived to be in a ‘normal’ mental state.

In the other 96% of police interactions, the subjects were perceived to be

Despite the rise in assaults, there were less injuries to Lethbridge Police officers in 2020 compared to 2019.

“I know one of the things we were very proud of was the ‘de-escalation training’ that we introduced in 2020,” said Sgt. Rick Semenuik, “which I think led to a big reason for the lowered number of injuries, and that’s definitely one thing that we are continuing in our training.”

On interesting note at the end of the report stated:

Unfortunately, the report did not elaborate on these ‘Unintentional Discharges’.

With that exception, I commend the Lethbridge Police Service for their openness and transparency surrounding use of force and police interaction with citizens.

Other police forces are not so transparent on this issue. The Vancouver Police Department’s. The VPD’s annual report, for example, makes no mention of SBOR reports at all. 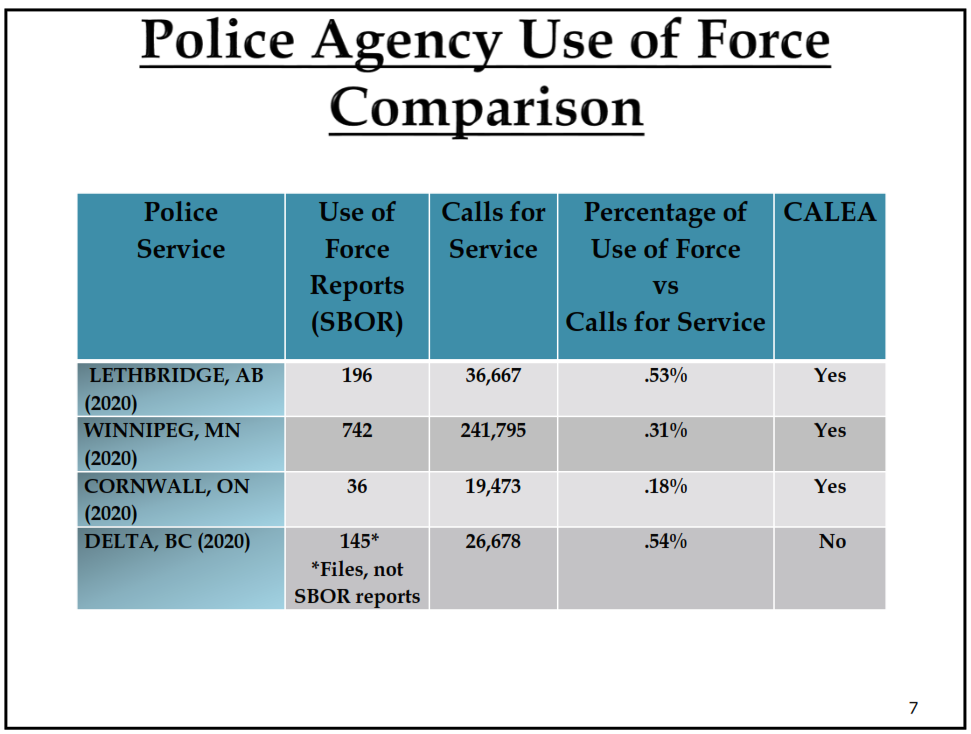 What is a Subject Behaviour Officer Response (SBOR) Report?

If an RCMP officer uses force, he or she must complete a use of force report following the incident. The RCMP uses a “Subject Behaviour / Officer Response” (SBOR) report. SBOR improves the accuracy of use of force reporting, and helps police officers clearly explain what happened in use of force incidents. It also provides statistical data on use of force trends across the country, which allows the National Use of Force section to review and update policy and training, when needed.

Incidents requiring the use of force by police are an unfortunate reality for law enforcement agencies. Each occurrence demands accurate documentation that demonstrates in detail the necessity of such a response. Police officers must be able to explain to an investigator, a judge, a jury or any court of inquiry that what they did at any given moment of time when applying use of force was reasonable and necessary based on the totality of the circumstances.

Lethbridge Police Service policy requires a Subject Behaviour Officer Response (SBOR) Report be completed whenever use of force is applied outside of normal handcuffing techniques, including any incident that results in injury to the officer, subject or bystander that requires medical intervention beyond a simple assessment.

An SBOR report is also required after any tactical display of a firearm or Conductive Energy Weapon (CEW) where a subject is present or the negligent discharge of a firearm or CEW. (Note: The Lethbridge report uses the term “Accidental discharge”.)