On April 9, 2021, a 46-year-old man’s negligent discharge caused him to shoot himself in the crotch while shopping at a Food Lion store in Salisbury, North Carolina.

“I turn around to see him grab his crotch and run to the front of the store,” one witness said. “Scared the crap out of me and some other shoppers.”

The brief WBTV news report did not say how badly the man may have injured himself “when something caused a handgun tucked into the waistband of his pants to fire.”

Holsters exist for a reason. When a firearm is properly holstered, nothing can unintentionally cause the trigger to be pulled.

Here in Canada, carrying a handgun for any reason is illegal – not that any of those Criminal Code provisions stop drug dealers, gang members and other violent criminals from packing heat every day. Like any other law, the one against carrying a loaded handgun in public only affects those citizens willing to obey it – and the aforementioned criminal class don’t give a crap about laws like these.

For my American friends, if you’re going to carry a handgun for self-defence, please do your research and use a proper holster for appendix carry.

The pecker you save just might be your own.

A comprehensive study of 300 negligent discharges by ConcealedCarry.com revealed one telling statistic:

After reading through 300 different news stories about these discharges one thing has become clear. In all of the articles that we went through these discharges WOULD NOT have happened if those handling the firearms followed proper gun safety protocols. 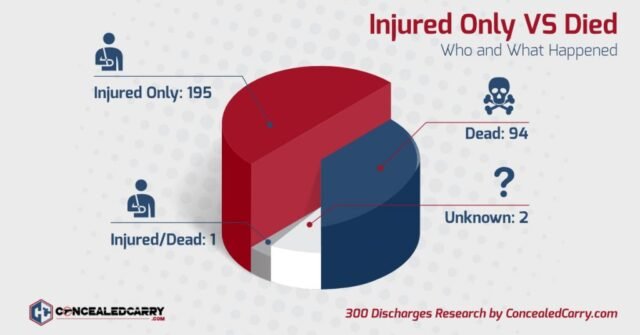 As you can see from the above graphic, the number of those discharges that ended in a death equaled roughly one-third of the incidents we looked into. It’s hard to imagine someone you care about getting hurt or dying simply because of improper handling of a firearm, but it is a fact that it does happen and far too often. Modern medicine has done a lot however and the death rates related to gun accidents, suicides, and attempted homicides have all dropped steadily over the last 50 years.

Nearly 48% of the time a negligent discharge injured or killed someone OTHER than the person holding the firearm. If that doesn’t scare you into using proper gear when carrying a loaded firearm, I doubt anything will.