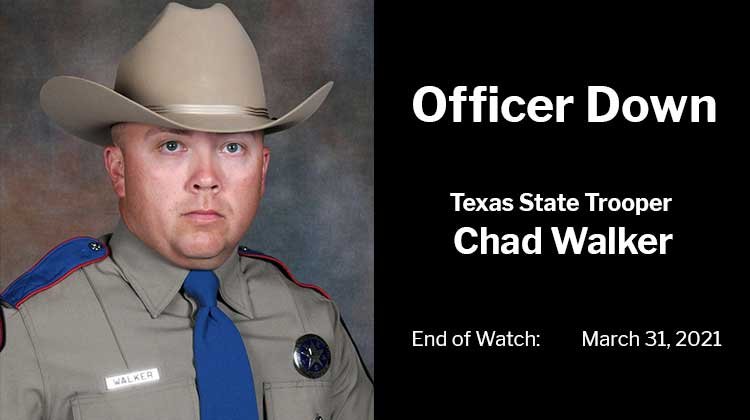 When Texas State Trooper Chad Walker pulled over to assist what he thought was a motorist having car trouble on the evening of Friday, March 26, 2021, the thought of a violent encounter was probably the furthest thing from his mind.

Yet, before the trooper’s patrol vehicle came to a complete stop, the driver of the other car jumped out and shot at Trooper Walker’s vehicle.

One bullet struck Trooper Walker in the head, another in the abdomen.

A short time later Trooper Walker was transported to Hillcrest Hospital in Waco, Texas, where he was placed on life support because his injuries were so devastating his body could not remain alive without mechanical assistance. After his organs were donated to help save the lives others, a last testimony of Trooper Walker’s sacrificial spirit, the machines were turned off.

“This final sacrifice embodies Trooper Walker’s actions throughout his life and service as a Texas Highway Patrol Trooper. The Walker family is grateful for the continued support and prayers as they remain at Chad’s side,” tweeted the Texas Department of Public Safety.

Texas State Trooper Chad Walker died on March 31, 2021, five days after he was ambushed on the side of the highway.

“Our DPS family is absolutely heartbroken at the loss of one of our brothers in uniform who was killed in the line of duty,” said Texas Department of Public Safety Director Steven McCraw.

“Texas Highway Patrol Trooper Chad Walker was committed to protecting the people of Texas. His sacrifice will never be forgotten, and we ask that you keep his family, friends and colleagues in your prayers during the difficult days ahead.”

Family and friends created a GoFundMe page to help Walker’s family pay these medical bills. As of Friday, that page has raised $243,970 for Trooper Walker’s family.

“With permission of the family, we are collecting funds to assist with medical and travel needs during this very difficult time,” the GoFundMe page says.

Trooper Walker is survived by his wife, 15-year-old son, twin 7-year-old daughters, and a two-month-old daughter.

Walker’s murder, Dearthur Pinson Jr., fled the scene immediately and hid in the woods and killed himself on Saturday evening.

Police discovered the alleged killer’s dead body inside the house where he barricaded himself during a standoff with law enforcement.