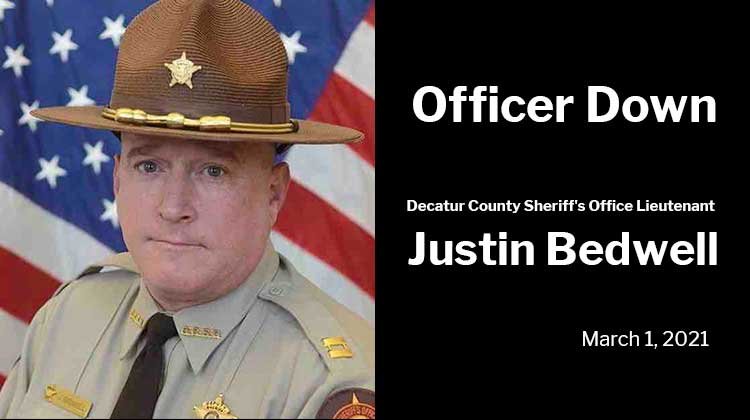 On March 1, 2021, Decatur County Sheriff’s Office Lieutenant Justin Bedwell died from a gunshot wound to the chest he suffered on February 28.

Lt. Bedwell was a 19-year veteran of the Decatur County Sheriff’s Office.

A deputy in Seminole County attempted to pull over a white pickup for reckless driving but the truck, with two men inside, didn’t stop.

Instead of pulling over and accepting the ticket like a normal person, the driver of the white pickup chose a high-speed chase that ended with shots fired at multiple police officers, injuring two and ultimately killing Lieutenant Justin Bedwell.

The men fired a weapon at deputies pursuing them and the deputies returned fire. When the chase moved into Decatur County, deputies there joined the pursuit.

The suspects came to a stop in the driveway of a home where they attempted to gain entry by shooting through the door but the homeowner returned fire.  Needless to say, the two left that home shortly after being shot at.

One of the suspects shot Lieutenant Justin Bedwell with a rifle as he arrived on scene. The .30 calibre bullet hit him in the chest, critically injuring him.

The suspects, later identified as brothers, fled the scene in their truck but crashed their truck in a nearby wooded area a short time later.

Georgia is a death penalty state so. if there is any justice, the Phillips brothers will meet their maker in due time, courtesy of the State of Georgia.

Lieutenant Justin Bedwell is survived by his wife Katherine and her daughter.

His sister-in-law, Susan Walker-Henderson, set up a GoFundMe fundraiser to help his grieving family. If you are able, please donate generously to this campaign at: https://www.gofundme.com/f/help-critically-injured-officer-justin-bedwell

On behalf of all Georgians, the Kemp Family sends our heartfelt prayers to Lt. Bedwell’s family, loved ones, and fellow officers in light of this heartbreaking news. His heroic sacrifice and dedicated service will not be forgotten. https://t.co/7rNPZQgGnO