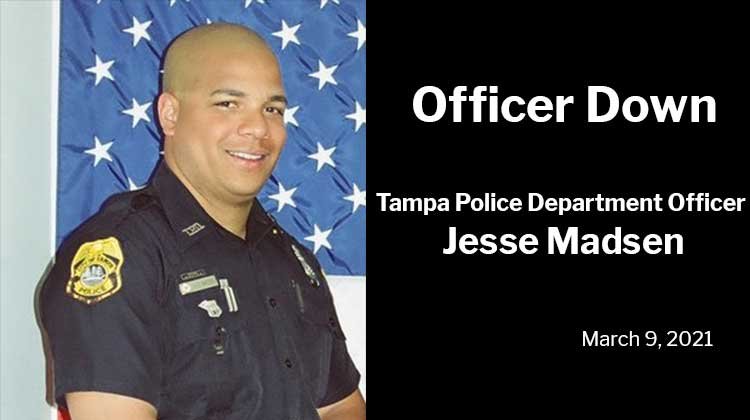 Tampa Police Department Master Patrol Officer Jesse Madsen gave his life so others may live, but how many lives he saved will never be known.

In the early morning hours of March 9, 2021, Tampa Police began receiving calls about a white vehicle driving southbound in the northbound lanes of I275 at a high rate of speed and swerving through the lanes.

Officer Jesse Madsen moved his police vehicle into the path of the wrong-way driver to prevent the driver from hurting others. That heroic decision cost him his own life even as he saved the lives of others.

Within one minute of the original call, the white sedan crashed into Officer Madsen’s police vehicle between the Hillsborough and Sligh Avenue exits.

The impact killed both Officer Jesse Madsen and the driver of the white sedan.

For the past 16 and a half years, Jesse has served proudly as a Tampa Police Officer where was a seven-time recipient of the Tampa Police Department’s Life-Saving Award.

Jesse Madsen’s badge, number 507, will be retired and his name will be etched for eternity into the Tampa Police Fallen Officers Memorial. He is the 32nd Tampa Police Officer to make the ultimate sacrifice. He will never be forgotten.