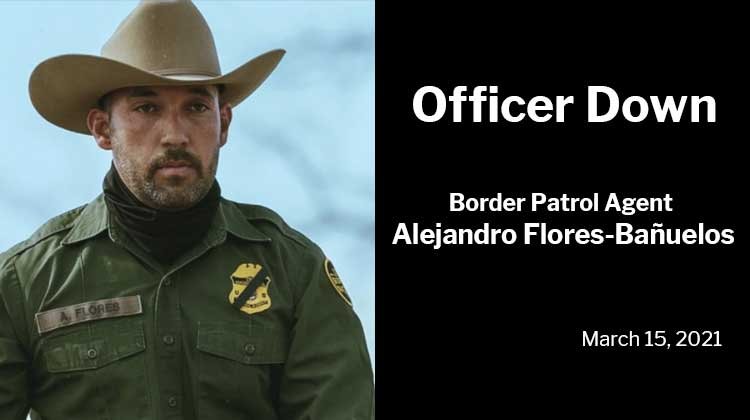 U. S. Border Patrol Agent Alejandro Flores-Bañuelos was struck by a vehicle and killed while rendering aid to a broken down motorist on March 15, 2021.

“It is with a profound sense of loss that we mourn the passing of one of our own, Border Patrol Agent Alejandro Flores,” said El Centro Sector Chief Patrol Agent Gregory Bovino.

“The men and women of the El Centro Sector will be deeply impacted by this tragic loss.”

Agent Flores-Bañuelos responded to reports of an accident on Route 86 north of Marina Drive about 4:20 p.m. during a dust storm that produced low visibility, according to the California Highway Patrol.

Agent Flores-Bañuelos was the first to arrive on scene and began assisting a 75-year-old woman in the right front passenger seat of a Nissan Sentra that had become disabled in the road, officials said.

A 64-year-old man from Borrego Springs driving northbound struck both the agent and the Sentra.

Agent Flores-Bañuelos was transported to Pioneers Memorial Hospital in Brawley, California, where he was pronounced dead.

Agent Alejandro Flores-Bañuelos, 35, was a veteran of the U.S. Marine Corps and is survived by his pregnant wife and three children.

The crash that claimed his life remains under investigation.

On March 25, 2021, Alejandro Flores-Bañuelos’ body was escorted from El Centro, where he served with the Border Patrol, to Beaumont, where he and his family lived. Firefighters and police officers lined the route to pay their respects to the agent who lost his life in the line of duty.

A GoFundMe page, the Agent Alejandro Flores-Banuelos Memorial Fund, was set up to assist Agent Flores-Bañuelos’ wife and family, and has raised, at the time of writing, just over $93,000.

If you are able to donate to help his grieving expectant widow and her children, I would be most grateful.