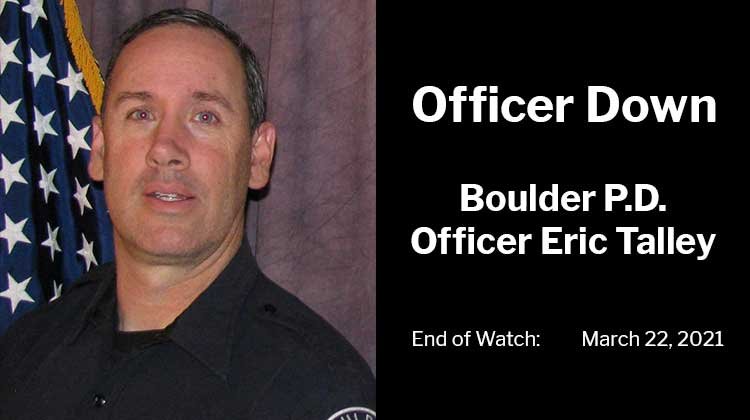 On March 22, 2021, 51-year-old Officer Talley was the first officer to respond to an ‘active shooter’ call at King Sooper grocery store.  He was the 10th and final person murdered by 21-year-old Ahmad Al Aliwi Alissa, a Syrian-born Muslim.

“He took his job as a police officer very seriously. He had seven children. The youngest is 7 years old. He loved his kids and his family more than anything. He joined the police force when he was 40 years old. He was looking for a job to keep himself off of the front lines and was learning to be a drone operator. He didn’t want to put his family through something like this and he believed in Jesus Christ.”

In a phone interview with CBS News, Talley said he was “not surprised at all” that his son put his life on the line to help others, because “that’s who he was.”

“I’m grateful for the police officers that responded, and I am so sorry about the loss of Officer Talley,” said Boulder Police Chief Maris Herold.

Eric Talley joined the police department when he was 40 years old. He held a masters degree in computer science but wanted to help others, hence the decision to become a police officer.

“I can tell you that he’s a very kind man and he didn’t have to go into policing, he had a profession before this, but he felt a higher calling,” said Chief Herold. “He loved this community and he’s everything that policing deserves and needs.”

“He was, by all accounts, one of the outstanding officers of the Boulder Police Department,” said Boulder County District Attorney Michael Dougherty, who promised to get justice for all 10 murder victims and their families.

“Eric was a man who gave his life,” said Denver Archbishop Samuel Aquila during Talley’s Catholic funeral mass. “And Jesus has told us, ‘Greater love hath no man than this, that a man lay down his life for his friends.’”

On March 22nd, Officer Talley was honoured by a procession of first responder vehicles paying tribute to his sacrifice. and the usual Twitter trolls came out to denigrate Talley, his sacrifice, and police in general.

It’s a sick sign of the state of our society when we can’t set aside hatred for 5 minutes to honour a man who gave his life in the defence of complete strangers.

Officer Eric Talley is survived by his wife, seven children and parents.

As with many mass killers, the warning signs were everywhere, but nobody acted on them.

“He was kind of scary to be around,” said Dayton Marvel, a teammate on the wrestling team.

“His senior year, during the wrestle-offs to see who makes varsity, he actually lost his match and quit the team and yelled out in the wrestling room that he was, like, going to kill everybody. Nobody believed him. We were just all kind of freaked out by it, but nobody did anything about it.”

If only these angry and hate-filled people would start with the last name on their evil list first (their own), the rest of us would be spared the horror of their heinous acts.