The most dangerous call police officers ever respond to is the ‘domestic dispute’. Passions are already raging out of control, hence the call to police for help, and responding officers are expected to douse those flames in short order.
It’s the hardest of jobs and definitely not for the faint of heart.

By all accounts, Orlando Police Department Officer Kevin Valencia accepted the challenge without hesitation.
On the evening of June 10, 2018, Officer Valencia did his job. He responded to a stranger’s call for help.

“Officer Valencia risked his life for people he didn’t even know — a risk that many in the law enforcement profession take without question,” Orlando Police Department Chief Orlando Rolón wrote in his statement announcing the death of Officer Valencia.

“Since that tragic night, Officer Valencia has been fighting for his life with his family by his side.”

On March 15, 2021, Kevin Valencia lost his battle. He is survived by his wife, Meghan, and their two children.

He was shot in the head responding to a domestic violence call on June 10, 2018, where Gary Wayne Lindsey Jr., a man with a decade-long history of domestic violence and other criminal offences, barricaded himself inside his girlfriend’s apartment with her four children.

A 24-hour standoff ensued, during which Lindsey murdered all four children before killing himself.

Valencia was rushed to the hospital and remained in a coma for over two years.

In March 2020 Kevin Valencia was officially retired from the Orlando Police Department on a medical pension, ensuring he received 80% of his annual salary. The pension began on April 1, 2020.

Valencia “served with Courage, Pride and Commitment for four years and his honorable service will never be forgotten,” said OPD Chief Orlando Rolón at the time.

Valencia eventually regained consciousness in October, 2020, but was a long way from recovering.

“A few days ago he began interacting with Meghan by rubbing her head and giving her a kiss,” according to one OPD spokeswoman.

Days later Valencia was awarded the Purple Heart by the Orlando Police Department. Meghan Valencia accepted the award on her husband’s behalf.

The real tragedy is the lives of Officer Valencia and those four murdered children could have so easily been saved – if only Gary Wayne Lindsey Jr. had been incarcerated after any one of his numerous probation violations.

On the day the mass murderer killed himself, Lindsey was on probation after he pleaded no contest to domestic battery, arson and fleeing law enforcement in 2008. That plea also included a suspended 10-year prison sentence, but it was never enforced — even after he repeatedly violated his probation.

Now, those repeated justice system failures mean Meghan must carry on without her husband and their two children must grow up without their father.

All because nobody would put this violent, repeat offender behind bars where he belonged.

That sickens me more than words can adequately express.

My heart goes out to Meghan Valencia, two her children, and the entire Orlando Police Department family.

This evening, Officer Kevin Valencia was escorted by our officers, as well as those from other agencies. Brother, we’ll take it from here… pic.twitter.com/UcywwuLdug 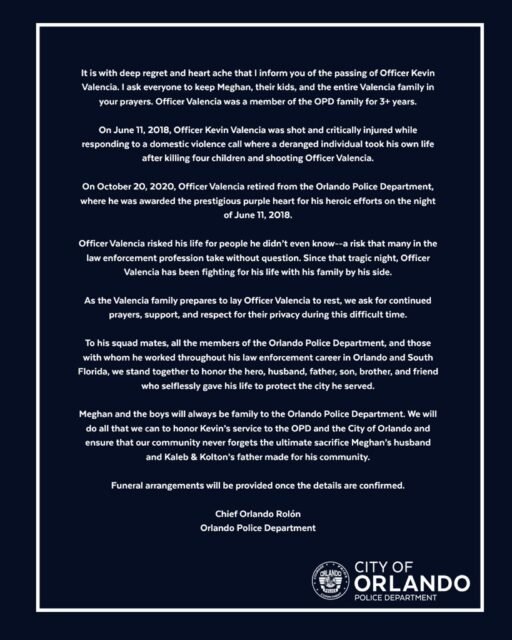