This raises an obvious question. A couple of them, actually.

Do the Alberta authorities really believe Pastor James Coates is a greater threat to public safety than “a child sex offender with pedophilic interests towards both male and female children“?

The utterly absurd answer appears to be “YES!”

Pastor James Coates was denied bail for the third time on Friday morning, March 5, 2021. But a convicted child sex offender roams the streets of Edmonton free.

You just can’t make this stuff up.

From the Edmonton Police Service Public Warning about Cyle Larsen:

In the interest of public safety, the Edmonton Police Service is issuing the following warning; Cyle Larsen is a convicted sexual offender and the Edmonton Police Service has reasonable grounds to believe he will commit another sexual offence against someone under the age of 16 while in the community and, as such, there is a duty to warn the public about the risk LARSEN poses.

Larsen is considered a child sex offender with pedophilic interests towards both male and female children.  LARSEN has a history of opportunistic offending against children known to him; and has shown he will groom and/or lure his victims if given the chance.

On Thursday night, The Western Standard was live and uncensored with Danielle Smith, Erin Coates – Pastor James Coates’ wife, and John Carpay of the Justice Centre for Constitutional Freedoms.

The two-hour event covered a lot of ground as Danielle Smith repeatedly expressed her consternation with the decision of the Alberta government to imprison Pastor James Coates.

“Thank you, Erin, so much for joining us tonight. I want to start to by saying how confused I am about your husband’s case. It seems bizarre to me that the pastor would be put in prison. Fair enough. It seems doubly bizarre to me that he was denied bail. Fair enough. Seems triply bizarre that he was denied appeal on bail, and that they kicked it over to tomorrow.

“So he’s potentially going to be imprisoned in the [Edmonton] Remand Centre until May 3rd to 5th when his case is supposed to be heard.

“The reason I’m so perplexed about this is because I thought it was against the Criminal Code to tell a Pastor that they were not allowed to give sermons, and yet that seems to be one of the bail conditions.

“I’m also looking at this story from a couple of days ago, where a Cyle Larsen has been released from the Edmonton Remand Centre with a warning from the Edmonton Police. They issue a public warning after a sexual offender is released again. They have ‘reasonable grounds to believe’ Larsen, 29, ‘will commit another sexual offence against someone under the age of 16 while in the community’.

“They clearly believe your husband is a greater danger to the community than an offender like this. This is why this case is so perplexing to me.”

I encourage you to click on the image below and listen to the entire interview.

Erin Coates is incredibly eloquent in her defence of her husband and her church.

John Carpay delivers an excellent overview of the constitutional issues arising from the imprisonment of Pastor James Coates, and Danielle Smith asks all the right questions of both of them. 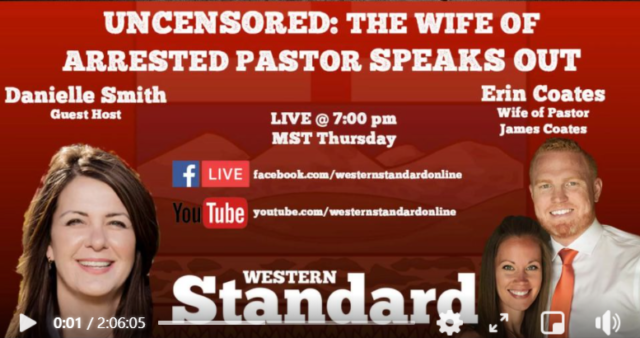