Imagine this scenario. You’re the owner of a storage unit rental company and, after a customer fails to pay their bill after their lease expired, you open the storage unit to empty it out so you can rent it to a new customer – presumably one who will pay their bill.

Instead of a quick clearing out of whatever your deadbeat renters left behind, you discover two rifles, two wooden crates of ammunition and a couple more boxes filled with even more ammunition.

You lock the unit again and call the police.

They arrive, seize the guns and ammo along with a copy of your storage rental agreement for the locker.

A lengthy police investigation begins, one that ultimately concludes with the arrest of two men in early February, one of whom was subject to a Firearms Prohibition Order.

Cory Hagan, age 33, of Orillia, was arrested and charged with possession of firearm or ammunition contrary to prohibition order.

I was unable to locate an prior court records for Cory Hagan, but an individual isn’t typically issued a firearms prohibition order without good reason.

If you live in Orillia, you’ll be comforted to learn both men were released from police custody on a promise to appear at the Ontario Court of Justice in Orillia on April 6, 2021.

I’m sure their conditions of release include another Firearms Prohibition Order.

I’m far less sure they will abide by those conditions of release.

None of this is a concern for Public Safety Minister Bill Blair, of course, since Blair has no interest in ensuring offenders with Firearm Prohibition Orders against them obey those court orders.

Imagine what a difference Bill Blair could make if he was half as interested in keeping illegal guns out of the hands of criminals with Firearm Prohibition Orders as he is about banning Airsoft guns from ordinary, law-abiding Canadians? 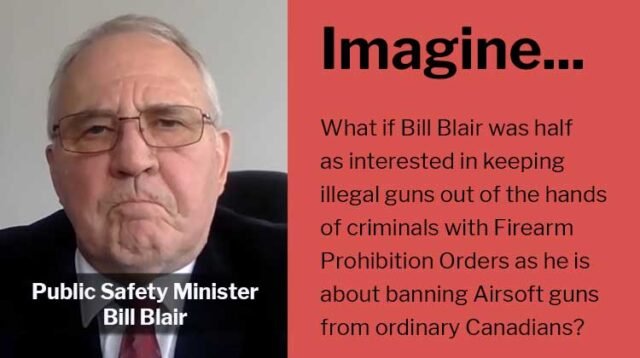