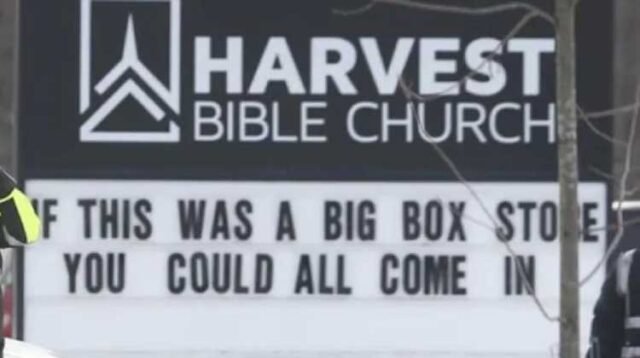 Dr. Bonnie Henry, British Columbia’s very own High Priestess of COVID, doubled down on her hatred of religious worship services, despite over 500 cases of COVID linked directly to the Whistler/Blackcomb ski resort (which remains open).

Bonnie Henry will now attempt to have church pastors arrested and hauled off to jail for daring to defy her senseless and contradictory public health orders.

Lawyers for the High Priestess will be in B.C. Supreme Court on Friday, CBC reports,”seeking orders against the leaders of Langley’s Riverside Calvary Chapel, Abbotsford’s Immanuel Covenant Reformed Church and the Free Reformed Church of Chilliwack.”

Big White ski resort in the BC Interior had 50 confirmed cases linked to their facility in December but there was no order to shut down ski resorts.

This directly contradicts the advice Bonnie Henry gave six weeks ago, an inconvenient fact lost on the High Priestess of COVID.

“According to the court documents,” the CBC report says, “the province is seeking an order that would prevent elders and members from gathering to worship in their churches and from organizing celebrations, ceremonies, baptisms, funerals or any other “event” as defined by Henry’s orders.”

On Sunday, February 14, 2021, we could see police arrest Canadian Pastors and haul them away in handcuffs.

Did you ever think you would live long enough to see this utterly insane day?

There is still a chance, however small, for common sense to prevail.

My most sincere hope and prayer is BC Supreme Court Justice Christopher Hinckson will uphold the Charter of Rights and Freedoms, the highest law in the land, coming Friday.

If a B.C. Supreme Court Justice can’t comprehend the fact our Charter rights don’t cease to exist during an emergency, however dire it may be perceived by some, there will be no hope left for any of us.

Whistler is, in the month of January alone, linked to more COVID cases than all religious worship services in British Columbia combined since COVID began.

But churches are the public health hazard, right Bonnie?

It’s permissible, according to the High Priestess, to do practically everything in British Columbia except attend a worship service.

The hypocrisy is blatant but neither Bonnie Henry, her army of lawyers or Premier John Horgan give a crap.

My Request To All Church Attendees This Sunday

It is legal to record police performing their duties in Canada.

Police cannot legally order you to stop filming them.

Make sure you have a device capable of recording video with you at your chosen place of worship on Sunday morning.

Should police break in while the service is ongoing (a crime under Canadian law) do not interfere with police but RECORD EVERYTHING.

The world needs to see the egregious attacks on religious freedom in Canada in 2021.

Only you can provide that witness.

If you’re unwilling to post the video yourself, send it to me. I’ll post it on my social media accounts to maintain your anonymity.