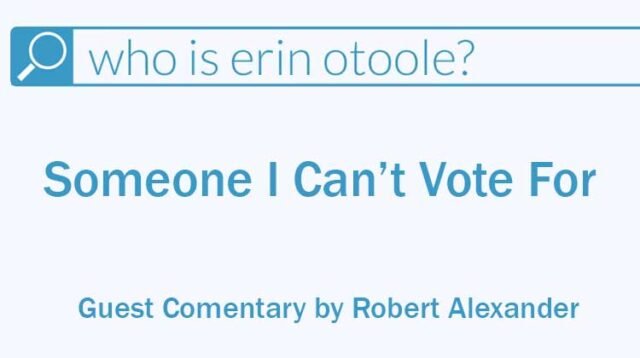 Who is Erin O’Toole?

Someone I can’t see myself voting for, that’s who. That man is neither my idea of a leader nor of a modern Conservative.

I agree Derek Sloan was probably not a good fit for the party. I can see that. His departure COULD have been handled respectfully, or at least civilly, but it wasn’t. It was obviously not enough simply to part ways with a sitting MP, but for O’Toole to attempt to destroy him in the process.

Those actions are despicable, and simply serve to reinforce what I have heard about O’Toole’s behaviour in Parliament. He’ll stab you in the back if given half a chance.

Aside from the distasteful actions, where are the Conservative policies? Where is even the slightest passing concern for our rapidly eroding civil liberties? Where are the policies to restore liberties and rights?

Is this one of those brave policies? Making a video about how much I love Canada and poutine?

Are these the great win-back-our-country and liberty ideas coming out of the Conservative Party?

Why are Conservative MPs not pounding their desks in the House in outrage over the egregious violations of basic rights and due process for citizens returning to Canada?

There is NO conceivable rational excuse for this, and it is outrageous to see this happening in Canada.

It must stop immediately and those making these Draconian decisions need, by election or recall, to be removed from office at the earliest opportunity.

Yes, I know Justin wants to be just like the dictators he openly admires, but I don’t want to live in that hell hole.

Why are the Conservatives not fighting for our BASIC LIBERTIES?

I certainly won’t vote for Justin, but I also can’t in good conscience see myself supporting O’Toole and his brand of semi-woke-leftism.

We need a fierce fearless leader with legendarily thick skin to start standing up for Canada and regular Canadians who simply want to live in harmony with their fellows, whoever they are, in a free Parliamentary democracy without the socialist bloat, not the totalitarian shitstorm Justin and pals have planned for us.

O’Toole is not that man.

“Whoever would overthrow the liberty of a nation must begin by subduing the freeness of speech.”
— Benjamin Franklin