Civil asset forfeiture is the legal procedure for seizing your assets without the tedious requirement of convicting you, the hapless property owner, of a criminal offence.

If it were anyone but government officials doing the stealing, this would be called theft. Because it’s government, their lawyers call it a ‘victimless prosecution’ where the property, not the property owner, is put on trial.

SB98 opts Utah out of the federal ‘equity sharing’ program that state police agencies were using to circumvent “Initiative B” – a 2000 initiative designed to limit the ability of government to steal property from innocent people.

When Utah voters put “Initiative B” on the ballot two decades ago, Utah law enforcement officials fought tooth and nail to stop the measure that would derail their gravy train. Despite their opposition, or perhaps in spite it, voters overwhelmingly supported “Initiative B”, which passed by 69%.

According to the Libertas Institute, after the 2000 restriction, “Law enforcement officials immediately sought to undermine the law and re-introduce the ability to obtain a part of the resulting proceeds from the confiscated property.”

In 2013, law enforcement crafted legislation that gutted several private property and due process protections in forfeiture law and then stood by silently—and knowingly—while the legislature was misled into believing that the lengthy change to forfeiture law was only technical and superficial, as opposed to substantive.

Our policy analysis, written a few months later, highlighted what law enforcement had done. To correct this gross error and restore these deceptive changes, we proposed legislation designed to restore these changes.

It’s refreshing to see a jurisdiction anywhere in North America taking private property rights seriously precisely because it is so rare.

For those familiar with the Bruce Montague case, you may remember the Ontario Provincial Government attempted to steal the Montague family home using civil forfeiture under the Civil Remedies Act.

For reasons they never explained, the provincial government abandoned the seizure attempt of the Montague family home. Bruce and Donna still live there today. 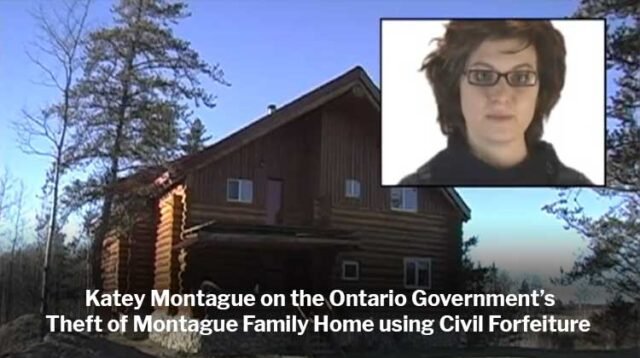 In 2015, the Institute for Justice published the second edition of their landmark report, Policing for Profit: The Abuse of Civil Asset Forfeiture, which describes civil forfeiture as a threat to the “constitutional rights of all Americans”.

Using civil forfeiture, the government can take your home, business, cash, car or other property on the mere suspicion that it is somehow connected to criminal activity—and without ever convicting or even charging you with a crime.

Most people unfamiliar with this process would find it hard to believe that such a power exists in a country that is supposed to recognize and hold dear rights to private property and due process of law.

Policing for Profit’s interactive 3rd edition was published in December 2020, and is required reading for all North Americans. [download PDF]