On October 15, 2006, RCMP Constable Adree Mohammed Zahara fired nine bullets from her RCMP-issued pistol into the wall of her home during a domestic dispute with her partner, Constable Chuck Simm.

A December 21, 2006, Saskatoon Star-Phoenix news report, shown below, informed readers that Constable Sahara pleaded guilty to a lone charge of careless use of a firearm related to a domestic dispute in her home. 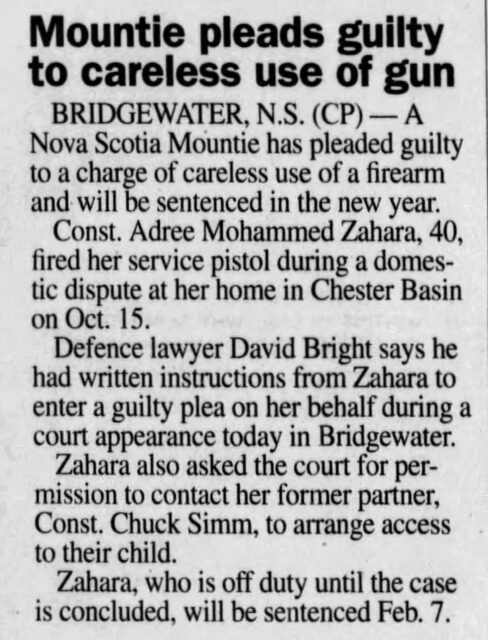 On February 7, 2007, Constable Zahara was handed a conditional sentence and probation. She also received a two-year Firearm Prohibition Order that came with one bizarre exception – she would be permitted to carry her RCMP-issued sidearm while on duty.

How is this possible?

This is a woman who, in a fit of rage, fired nine bullets from her RCMP-issued handgun into the wall of the home she shared with her partner and child.

Simply put, Crown prosecutors did not proceed by indictment, which carries a maximum prison term of two years.

By proceeding summarily, the harshest sentence possible was six months in jail, a $2,000 fine or a both, plus probation.

According to a news report reproduced on BlueLine.ca’s forum:

Constable Zahara’s case raised the hackles of some senior officers who say she landed a “plum job” after committing a serious crime.

“Should she be a police officer? . . . Simply put, no. She stepped over the line,” said one police source who did not want to be identified.

Const. Zahara, who is not allowed to carry her gun, has been working on administrative duties in metro Halifax since Nov. 3, RCMP spokesman Sgt. Frank Skidmore said. He couldn’t elaborate, but sources said she is working at the force’s Bedford office doing administrative work for the VICLAS (violent crime linkage analysis system) unit. She is not working as a VICLAS specialist, which would require expert training.

The decision not to suspend the officer from her $72,000-a-year job was made by the country’s top cop, who makes the final decision on all internal disciplinary matters.

Another news report reproduced on the BlueLine.ca forum said:

A Mountie who had “a bit of a meltdown” and fired nine bullets from her service pistol into the wall of her home has been put on probation for a year and will have no criminal record so she can continue what the judge called “an exemplary career.”

“The public interest is best served here by allowing a good officer to continue her career,” Judge Crawford said as she agreed to the joint recommendation from the Crown and defence for a conditional discharge and a year on probation.

Last week, two senior RCMP officers spoke to The Chronicle Herald on condition of anonymity. They said they thought Const. Zahara was getting preferential treatment, both in the criminal case and the internal investigation, and that it was damaging to the rank-and-file members and the public’s perception of the RCMP.

“Their credibility is totally destroyed,” one veteran officer said of RCMP management and the force’s handling of the investigation.

“She should have no credibility as a police officer. Period.”

Const. Zahara’s work with the VICLAS unit, at full pay, is a job that “80 per cent of front-line officers would give their you-know-what to have,” one officer said.

Mr. Nicholson said the shooting incident came to light when Const. Chuck Simm reported it to his detachment on Oct. 16. Const. Simm had been living common law with Const. Zahara and their three-year-old son until a few months before.

He said that on Oct. 15, Const. Zahara invited him to her home in Chester Grant to talk about their son and they got into an argument. He was working and in uniform. Const. Zahara was also in uniform, getting ready for her 4 p.m. shift.

Mr. Nicholson said Const. Zahara got “very upset,” went into her room and started smashing things. Const. Simm reported that he heard a gunshot, followed by several other shots. He kicked in the door and took her gun until she calmed down, then gave it back to her and she went to work.

When she didn’t report the incident, he did.

The issues I (and other mere citizens who legally own firearms) have with this slap-on-the-wrist sentence should be obvious to even the most ardent gun-hater.

Constable Zahara was permitted, by a judge in a court of law, to continue carrying her police-issue sidearm while on duty.

Constable Zahara didn’t serve a single day in jail, despite endangering the lives of everyone present during her ‘meltdown.’

Constable Zahara was transferred out of the Bridgewater RCMP detachment to Halifax and given a cushy desk job – one coveted by almost everyone in the RCMP.

I can’t imagine a scenario where a mere citizen would be treated with such velvety-soft judicial gloves.

Were any of Canada’s 2.2 million licensed firearm owners to fire nine shots from one of their legally-possessed handguns into the wall during a domestic dispute, I guarantee they would not be treated so gently.

They would have every gun they owned confiscated and destroyed and, at a minimum, face a slew of serious criminal charges that would probably include attempted murder.

If, by some miracle they weren’t convicted of the most serious charges, they would still spend a few years behind bars.

Constable Zahara is an RCMP Member and RCMP Membership most certainly has its privileges.