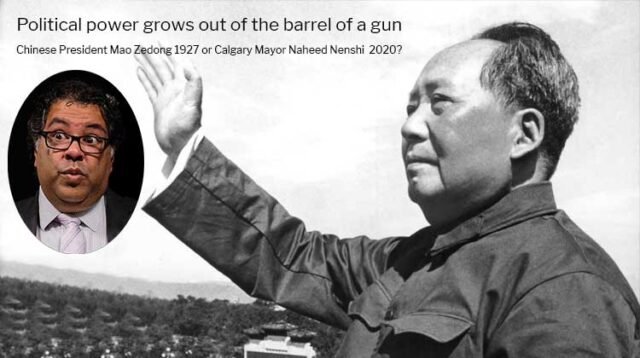 “Political power grows out of the barrel of a gun.”

It’s said that Mao Zedong, the most famous of Justin Trudeau’s dictatorial Chinese idols, first uttered this maxim on August 7, 1927.

For the sake of today’s political commentary, I’m going to attribute this quote to Calgary Mayor Naheed Nenshi, for he is ultimately in charge of the Calgary Police Service and its out-of-control power-hungry “affirmative action hires”.

Allegedly violating the Alberta government’s latest social distancing edict by daring to do what young Canadians have done for well over one hundred Canadian winters.

They played hockey on an outdoor ice rink.

When the Bylaw Enforcement Officer was unable to gain compliance from the hockey players, he or she called Calgary Police Services and asked for backup.

That’s when things really fell off the rails.

Two female Calgary Police Service constables arrived and, when one hockey player refused to leave the ice, they completely lost their composure.

In the constables’ defence, the young man refused to identify himself when asked to do so.

“By law, a person is required to identify themselves if they are being issued a ticket, otherwise they can be charged under the Criminal Code for obstructing an officer,” the Calgary Police Service tweeted two days later.

They’re correct, but that doesn’t address the entirety of the situation as it unfolded.

By law, police are required to inform a person why they are being detained, a fact the Calgary Police Service conveniently left out of their Twitter post.

The young man asked the constables one simple question.

“Why do you keep grabbing me?” 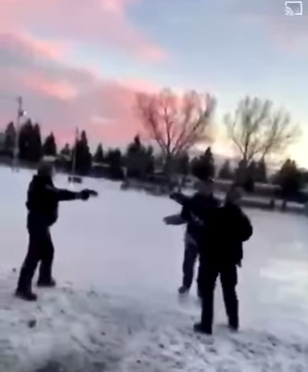 Instead of answering him, one of the female constables drew her police-issue Tazer and pointed it at the young man’s chest.

To the young man’s credit, he remained totally calm through the entire incident despite being physically grabbed, kicked and pushed around by the two women.

Eventually he allowed them to take him to the ground, handcuff him, and drag him away, but not until they cut off his skates, presumably in retaliation for making them both look so stupid in front of a crowd of mere citizens.

“The arrest ended up happening because there was non-compliance,” said CPS Supt. Ryan Ayliffe.

“We will not tolerate people that don’t want to willfully comply.”

Two police constables lost control of their emotions to the point they assaulted this 21-year-old hockey player when he refused to comply.

One of those constables became so unhinged, so enraged by Wiesblatt’s non-compliance she was willing to Tazer him…  over social distancing rules.

What if she didn’t have a Tazer?

Would she be willing to kill this young man for daring to defy her “authority”?

We don’t need to answer this question hypothetically because The Milgram Experiment answered it definitively 57 years ago.

“Ordinary people are likely to follow orders given by an authority figure, even to the extent of killing an innocent human being.”

This constable will eventually reach the decision that killing her non-conforming subject is “required” to gain compliance.

This brings me to Calgary Mayor Nenshi.

“If you see flagrant violations happening, you should phone them in,” Nenshi said the day after the incident.

“There’s no hard, fast rules on how many people may be on a rink … but you’ll know it when you see it,” he said.

Sounds like the definition of pornography given by US Supreme Court Justice Potter Stewart back in 1964.

Offense is in the eye of the beholder.

Reporting your fellow citizens to government snitch lines is now your duty.

Mayor Nenshi is the “authority figure” in the Migram Experiment I mentioned above and these two Calgary Police Service constables are its “ordinary people”.

Their blind obedience to the State means they will do what Nenshi orders them to do “even to the extent of killing an innocent human being.”