Minister Blair is 0-3 at finding a scapegoat for seizing and destroying legal firearms from licensed, RCMP-vetted firearm owners.

Conversely, Minister Blair is 3-0 at leaving illegal guns in the hands of drug dealers, gangs and other violent criminals.

First, Minister Blair issued a tender and listed 15 companies he wanted to apply. They declined his offer.

Then he issued a private Request For Proposal (RFP) but did so in secret. CSSA found out about it and published the private RFP, much to Minister Blair’s chagrin, I’m sure.

Yesterday we learned that three companies were asked to respond to the RFP. Only one of them did but but this news was kept hidden from the public.

While that process played out in the background, Minister Blair issued a second tender and listed 15 more companies he wanted to apply. As with the first tender, every single one of the them declined the Minister’s offer of tens of millions of dollars in free government money.

With regard to Public Safety Canada’s Request for Proposal (RFP) 202101232-1 Project Manager for Firearms Buyback Program:

(c) if the government contacted vendors to request they submit a proposal,

(i) what was the name of the company solicited,
(ii) the date of the initial contact,
(iii) the reason the vendor was selected for solicitation?

On December 7, 2020, Joël Lightbound, Parliamentary Secretary to the Minister of Public Safety, issued a response on behalf of Minister Bill Blair. (View PDF)

Altis Human Resources (Ottawa) Inc. is a temp agency. Their only expertise is in placing qualified individuals with employers.

They are not a project management company. They had nothing to do with Bill Blair’s Firearm Confiscation Compensation Scheme beyond fulfilling a staffing request on behalf of Public Safety Canada.

This nuance was either lost or misinterpreted, and Altis Human Resources Inc. found their Facebook page flooded with complaints and angry comments about their involvement with the program.

Regarding the release of false and misunderstood information earlier today, Altis Recruitment would like to clarify that we have nothing to do with the program, legislation, implementation or policy regarding firearms in Canada or anywhere else. Please read our statement below for more information. 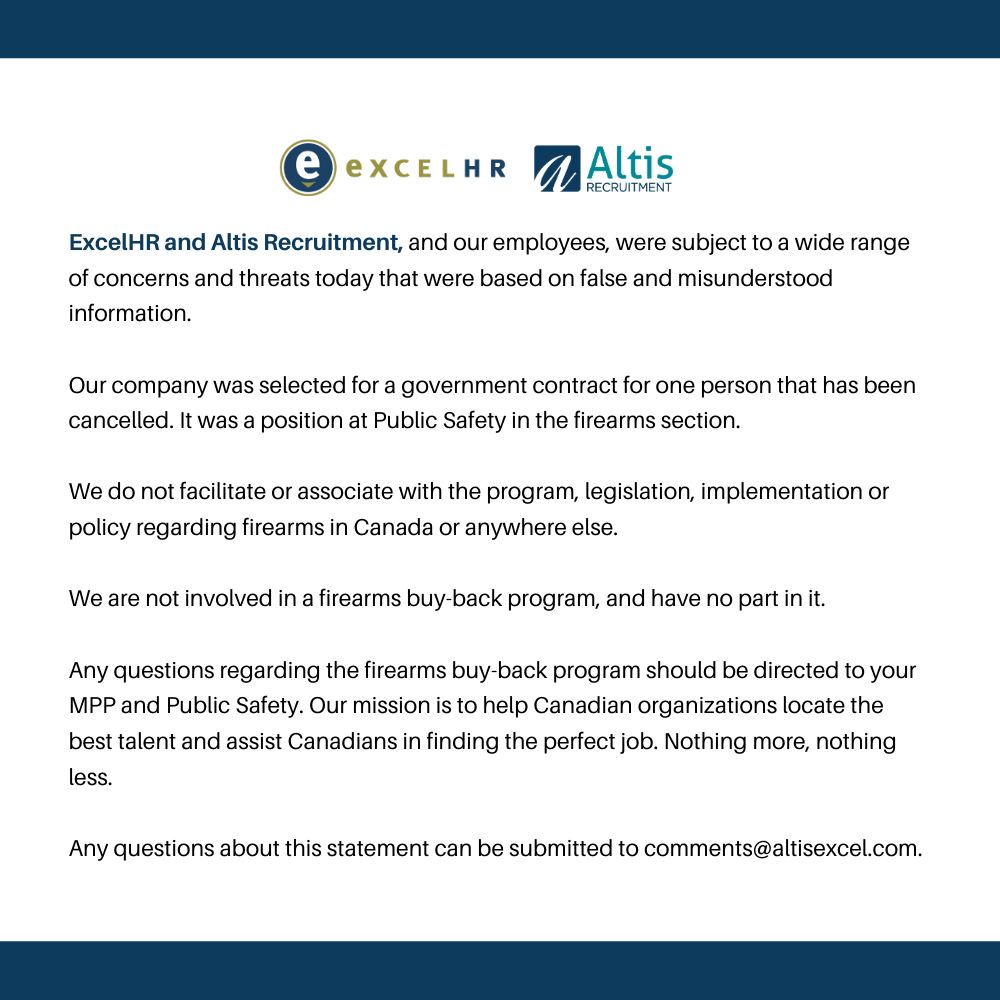 Is anyone taking bets on what Bill Blair will try next?