Hot on the heels of the Yasmin Ratansi scandal where the now-former Liberal MP hired her sister and lied about it, we learn Andrew Scheer stole a page from the Liberal Entitlement Handbook and took it to heart.

Andrew Scheer hired his sister-in-law, Erica Honoway, to work in his constituency office.

While technically this does not violate Parliamentary hiring rules, it’s still a colossally stupid move because politics is perception and appearance is reality.

Scheer didn’t have the stones to say it himself. That in itself is incredibly disheartening. Instead, he hides behind Kenzie Potter’s skirts and prays the whole thing will just go away.

The Liberals will ensure this remains top-of-mind for voters for as long as possible, if only to remove some of the stench of their own caucus member’s failings.

At least Erin O’Toole, Scheer’s replacement as leader, staked out a clear position.

“Canadians want and deserve better and I am going to expect that from my team,” he said on Tuesday, reiterating his personal expectations exceed merely following the rules.

On Tuesday afternoon, reportedly after meeting with Erin O’Toole, Andrew Scheer issued a written statement that says, in part:

“I understand that in this case, following the rules may not have been enough. Even the perception of a conflict concerns me. As such, I have met with Erica and I have ended her employment in my office.”

What Scheer failed to mention in his statement was that until Parliamentary hiring rules changed in 2012 to explicit prohibit hiring siblings, Andrew Scheer employed Anne Marie Grabetz, his sister, in his constituency office.  He was Speaker of the House and Deputy Speaker during this time frame.

This is not difficult stuff.

So why do so many politicians fall into the trap of believing the rules don’t apply to them?

I can’t answer that question. All I can do is explain to our political overlords of the expectations we mere citizens hold.

If your proposed course of action can’t pass the smell test, don’t do it, rules be damned.

Politics is perception and appearance is reality. 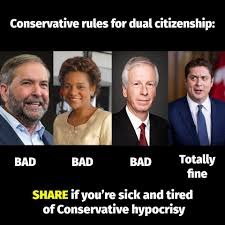 This current hypocrisy reminds me of Andrew Scheer’s August 13, 2005 blog post where he slammed Michaelle Jean for her French citizenship while conveniently ignoring his own American citizenship.

“I have a few quick questions for anyone who thinks that Michaelle Jean is a good choice to be our next GG. Does it bother you that she is a dual citizen (France and Canada)? Would it bother you if instead of French citizenship, she held U.S. citizenship?”

The move is “pretty borderline, particularly from someone who was both former speaker of the House and leader of a national party, who has always accused the Liberals of not meeting ethical standards,” said NDP MP Charlie Angus.

Charlie Angus is right, but Andrew Scheer has a long history of doing what he accuses others of doing.

No wonder the hashtag #ScheerStupidity trended on Twitter during the 2019 federal election.

And now he’s forced Erin O’Toole to wear his stupidity.

Are Canadians Buying What Erin O’Toole is Selling?

If the Conservative Party wants to show us, the mere citizens of Canada, that it’s different than the Liberal Party they need to stop acting like Liberals.

Does Erin O’Toole understand this?

Millions of Canadians hope and pray he does, but until the jury returns its verdict after the next federal election, we simply don’t know if voters perceive the difference.