Carolyn Strom is a registered nurse who lived and worked in Prince Albert, Saskatchewan.

On January 27, 2015, Carolyn Strom’s grandfather died. He was a 13-year resident at the long-term care facility St. Joseph’s Health Centre in Macklin, Saskatchewan.

On February 25, 2015 and while on maternity leave, the grieving Carolyn Strom posted her thoughts about her grandfather’s care during the last few days of his life to her personal Facebook account.

Strom’s Facebook post included a link to the article We have a right to die but not to quality palliative care by Dr. Harvey Chochinov, which states:

“For 70 to 80 per cent of Canadians, palliative care is not available and hence, not a real choice,” wrote Dr. Chochinov.

“To be clear, dying badly in Canada will rarely be the fallout of not having access to a lethal overdose or injection and, almost invariably, the result of inadequate or substandard end-of-life care.”

Then Carolyn Strom tweeted the link to her Facebook posts to both Saskatchewan’s Minister of Health and its Opposition Leader.

Some St. Joseph’s Health Centre employees “took exception to the posts and reported them to the Saskatchewan Registered Nurses’ Association (SRNA)”, who promptly charged Carolyn Strom with professional misconduct.

On October 18, 2016, the Discipline Committee of the SRNA found Carolyn Strom guilty of professional misconduct and breaching “various sections of the Code of Ethics and Standards  & Foundation  Competencies for the Practice of Registered Nurses.”

The Discipline Committee ordered Carolyn Strom be punished with the following:

All this because she dared question the care her late grandfather received during his final days on earth. In public.

“The SRNA is accountable for ensuring its members are competent in providing the services that society has entrusted to them.”

Mere citizens question that statement, believing that having a registered nurse, one of the SNRA’s own, publicly question the competency of health care providers in long-term care homes would be embraced in the spirit of openness and transparency.

Those mere citizens would indeed be confused – if only according to the Saskatchewan Registered Nurses’ Association.

The SNRA, it appears, is far more concerned with protecting its own reputation than guaranteeing quality care is provided to elderly individuals in long-term care facilities.

Any criticism of care providers must be punished swiftly and thoroughly, lest any other registered nurse be infected with the silly notion their opinion matters, let alone that it’s permissible to express their opinion in the public square.

Thankfully, Carolyn Strom refused to accept this absurd punishment without a fight.

Carolyn Strom appealed the Saskatchewan Registered Nurses’ Association discipline committee decision and their gross violation of her Charter Right to Freedom of Expression.

So Carolyn Strom appealed to a higher court.

Strom’s appeal was supported by the Saskatchewan Union of Nurses, the BC Civil Liberties Association and our good friends at the Canadian Constitution Foundation.  (Support the CCF)

Gun owners may remember the Canadian Constitution Foundation’s support and assistance was crucial to Bruce Montague when the Ontario government tried to steal the Montague family home using Ontario’s grossly misnamed Civil Remedies Act. The civil forfeiture proceeding was dropped, primarily due to the CCF’s efforts to publicize the Ontario government’s gross overreach.

The Saskatchewan Court of Appeals agreed to hear her case and, on October 6, 2020, ruled in her favour in Carolyn Strom v Saskatchewan Registered Nurses’ Association, 2020 SKCA 112.

The Honourable Mr. Justice Barrington-Foote, on behalf of the Court of Appeals, wrote:

Justice Barrington-Foote then quoted the entire Facebook thread. The underlined portions of Carolyn Strom’s statements were alleged to constitute professional misconduct by the SNRA.

My Grandfather spent a week in “Palliative Care” before he died and after hearing about his and my family’s experience there (@ St. Joseph’s Health Facility in Macklin, SK) it is evident that Not Everyone is “up to speed” on how to approach end of life care … Or how to help maintain an Ageing Senior’s Dignity (among other things!)

So … I challenge the people involved in decision making with that facility, to please get All Your Staff a refresher on this topic AND More.

Don’t get me wrong, “some” people have provided excellent care so I thank you so very much for YOUR efforts, but to those who made Grandpa’s last years less than desirable, Please Do Better Next Time! My Grandmother has chosen to stay in your facility, so here is your chance to treat her “like you would want your own family member to be treated”.

That’s All I Ask!

And a caution to anyone that has loved ones at the facility mentioned above: keep an eye on things and report anything you Do Not Like! That’s the only way to get some things to change.

(I’m glad the column reference below surfaced, because it has given me a way to segway into this topic.)

The fact that I have to ask people, who work in health care, to take a step back and be more compassionate, saddens me more than you know!

In response to a reply by “Alex”, Carolyn Strom wrote:

It is VERY UNFORTUNATE Alex. And this has been an ongoing struggle with the often subpar care given to my Hollman Grandparents (especially Grandpa) for many years now … Hence my effort to bring more public attention to it (As not much else seems to be working).

As an RN and avid health care advocate myself, I just HAVE to speak up! Whatever reasons/excuses people give for not giving quality care, I Do Not Care, It. Just. Needs. To. Be. Fixed. And NOW!

This led to another response from Alex, who said “there should never be a reason or excuse for not providing quality care” and “we all deserve to be treated with respect”.

Absolutely, and that’s why I am also now asking people to just rethink … “Why do you do your job?” “Do you actually care about the people you WORK FOR/Care For?” “Or is it JUST A JOB, WITH A PAYCHEQUE?” … If so, maybe it’s time to take a step back.

Either way I just want my Grandmother (and everyone else in that facility) to be treated well, ALWAYS!

In their initial charge of professional misconduct against Carolyn Strom, the Saskatchewan Registered Nurses’ Association said, (among a laundry list of complaints):

This violates your obligation as a professional to take concerns you may have to the appropriate channels starting with the individual care providers and if matters cannot be resolved at that level then to report it to their manager.

It is only if all of those efforts have not led to a positive change would you be able, with the consent of your grandparents or their power of attorney to take the matter to the public.

[155] To paraphrase Groia, the Discipline Committee did not adopt an approach that provided for the consideration of the “full panoply of contextual factors” particular to Ms. Strom’s case before deciding she should be disciplined despite the infringement of her right of free expression.

Justice Barrington-Foote went on to say:

In Canada, public healthcare is both a source of pride and a political preoccupation. It is a frequent subject of public discourse, engaging the political class, journalists, medical professionals, academics, and the general public.

Indeed, it can enhance confidence by demonstrating that those with the greatest knowledge of this massive and opaque system, and who have the ability to effect change, are both prepared and permitted to speak and pursue positive change.

In any event, the fact that public confidence in aspects of the healthcare system may suffer as a result of fair criticism can itself result in positive change. Such is the messy business of democracy.

[164]      In the result, the DC Decision not only denied Ms. Strom, and would deny other registered nurses, the right to choose their means of communication and audience, but would effectively preclude them from using their unique knowledge and professional credibility to publicly advance important issues relating to long-term care of the sort raised by Ms. Strom.

That is so despite the fact that there was no finding the posts were untrue or unfair.

Indeed, they appear on the face of it to present a balanced view of the care her grandfather received and of long-term care. They state that some of those who provide care to residents of long-term care do less than they should, could be more empathetic, could profit from more training, and are there for the paycheque.

These “critical” statements are a matter of common sense. Ms. Strom also praised some caregivers and proposed constructive solutions to address what she perceives as shortcomings.

[165]      This infringement is properly characterized as a serious impact on the type of speech that s. 2(b) of the Charter seeks to protect. The significance of that impact is increased by the fact that it related to Ms. Strom’s freedom of expression while off duty and in relation to her private life.

[167]      In my view, and for substantially the reasons explored in relation to the professional misconduct ground, it was a serious impact. Ms. Strom posted as a granddaughter who had lost one grandparent and was concerned for the future of another.

That fact was front and center for a reader of the posts. Although she identified as a nurse and an advocate, she was not and did not purport to be carrying out her duties as a nurse.

She was on maternity leave and spoke to the quality of care provided by a distant facility with which she had no professional relationship. The private aspect of the posts was made clear and was significant.

Further, and as has been noted, the posts have not been shown to be false or exaggerated and, on the face of it, would appear to be balanced.

[168]      The denial of the right to speak in these circumstances is important. Proportionality, of course, is not concerned solely with the severity of the impact on Charter rights. It is concerned with the balance between rights and objectives.

As noted above, there was evidence that some nurses and other staff at St. Joseph’s were angry and upset.

There was, however, no evidence that the fact these nurses took offence negatively impacted the broader public interest or the public standing of the profession or, indeed, of St. Joseph’s and its staff.

It bears repeating that speech cannot be unduly constrained to avoid offending others.

Nor is there any evidence that punishing Ms. Strom would have a salutary effect, other than, perhaps, by providing some satisfaction to some staff at St. Joseph’s.

[170]      In the result, I would allow Ms. Strom’s appeal and set aside the decision by the Discipline Committee that her conduct constituted professional misconduct, and the costs award. Ms. Strom shall have her costs of this appeal and of the proceedings in the Court of Queen’s Bench in the usual way.

“I’m glad that it has been ruled that I can have a voice,” Carolyn Strom said after her victory in court, “that nurses and professionals can have a voice about health care, especially when it involves our own family members.

I also appreciate Justice Brian A. Barrington-Foote’s decision for spelling out one critical aspect of our Charter right to freedom of speech that Prime Minister Justin Trudeau prefers to ignore. 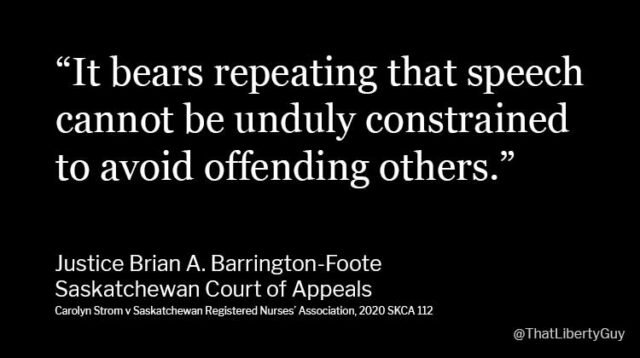 Finally, we all ow a debt of gratitude to the following organizations for coming to Carolyn Strom’s defense: