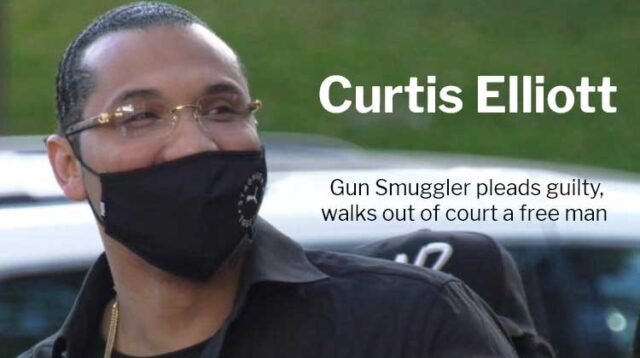 In March 2016, the Windsor Police Service arrested Curtis Elliott and nine other people for smuggling illegal guns into Canada.

This was the end of a year-long investigation in which police charged ten people with 111 criminal offences.

Curtis Elliott faced 33 of those charges.

On October 16, 2020, news broke that Elliott pleaded guilty and, as a result of the Crown’s plea agreement, walked out of court a free man. 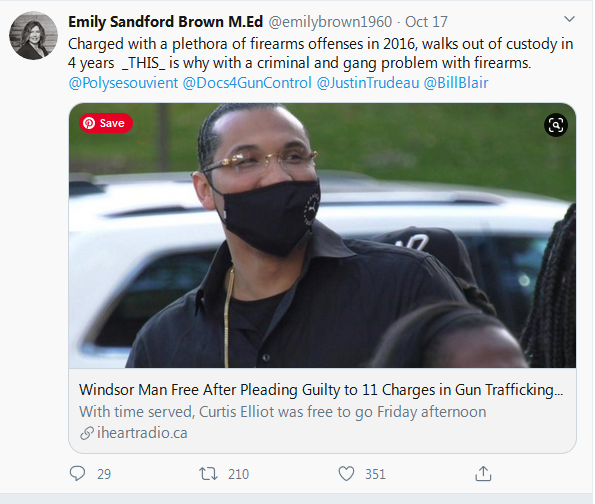 The photo of him published in association with his guilty plea showed him smiling broadly beneath his COVID mask. I’d be smiling too if I could walk away from 33 criminal charges for gun smuggling with only time served as my penalty.

Lest you mistakenly believe this is a case of a good man caught up with a group of bad people committing despicable acts, I’ll quote from two court decisions that explain, quite clearly, the opposite.

This is a bad guy with a long history of doing bad things.

“Mr. Elliott has a lengthy criminal record, including several prior convictions for failure to comply with court orders.”

“His record is substantial and contains 19 prior convictions for failing to abide by court orders.”

“Mr. Elliott had managed in the past to be highly resourceful with the telephone and had managed to move firearms by directing others to do his bidding.”

“Residential supervision and electronic monitoring did not necessarily protect the public from the commission of further crimes.  There remained a substantial likelihood that the public would be endangered if Mr. Elliott was released on bail.”

On October 4, 2019, Justice King wrote the following while denying bail at another review hearing.

“These concerns are compounded by the fact that while the GPS monitoring system will adequately record the movements of the accused, he can still become involved in the trafficking of weapons from his aunt’s residence.

“He has engaged in serious and violent criminal behaviour in the past without regard for the law. He has never demonstrated an ability or willingness to comply with court-ordered conditions.  Despite their good intentions, I have no confidence that Heather Elliott and/or David Radney will be able to exert any significant control over Mr. Elliott.”

This is the guy Ontario Assistant Crown Prosecutor Jennifer Holmes released on probation.

Three judges – the original Justice of the Peace who denied bail and two judges at subsequent bail review hearings – all said Curtis Elliott was too dangerous to release on bail because his criminal history is littered with charges for failing to comply with court-ordered conditions of release.

But he’ll comply with the terms of his probation this time?

“Mr. Elliott is going to go on now and lead a productive life. He is a young man with a future ahead of him and he’s anxious to get along with life, spend some time with his family and eventually get back to work.”

According to Justice Bruce Thomas, the total prison time for the mandatory minimum sentences add up to 18 years.

The joint plea agreement requested an eight-year sentence and, after credit for time served and bonus credits for being in prison during COVID, Curtis Elliott walked out of court a free man.

The full terms of his release were not published, as far as I can tell, but some of the conditions include submitting a blood sample to the DNA databank and a lifetime firearms prohibition.

Curtis Elliott is a lifelong criminal who smuggled illegal guns into Canada and sold them to gang members and other violent criminals.

Our government considers this pathetic sentence is an appropriate punishment for those who endanger the safety of all Canadians.

It should be easy to understand why I and others question the legitimacy or efficacy of confiscating legally owned guns from licenced Canadian firearm owners to prevent gang or other criminal violence.

Public Safety Minister Bill Blair, are you willing to take my bet that lifelong criminal and gun smuggler Curtis Elliott will be arrested again for selling illegal guns at some point in the near future?