Plumbing the Depths of Human Depravity

At about 6:30pm on Saturday, September 12, 2020, in Compton, California, an as-yet unidentified person walked up to a police cruiser parked at the MLK Transit Center in Compton and opened fire.

Two Los Angeles County Sheriff’s Department deputies sat inside the cruiser. Both graduated from the police academy just 14 months ago.

“The gunman walked up on the deputies and opened fire without warning or provocation.”

Without hesitation, the would-be murderer pulled a handgun their waistband and shot both police officers multiple times at point blank range.

It’s only by a miracle and God’s divine providence that these two police officers – a 31-year-old mother of a 6-year-old boy and a 24-year-old man – survived the ambush by a depraved and gutless coward.

It could easily have gone the other way – and not because of the attempted murder’s bullets.

A mob of utterly depraved people tried to block the entrance to St. Francis Medical Center to stop ambulances from reaching the Emergency Entrance.

These hate-filled degenerates screamed for the deaths of two critically-injured police officers.

Not satisfied with their attempts to ensure these officers died, this mob told police officers attempting to maintain peace outside the hospital, “You’re next!”

“Unacceptable behavior. The hospital should be a sanctuary, we should leave hospitals alone,” said Bishop Juan Carlos Mendez, a member of Churches in Action.

“And yet we have people fanning the flames of hatred and just turning up the volume when we don’t need to. We need to be turning it down.”

In the face of threats and insults hurled at them by depraved examples of humanity at its worst, Los Angeles sheriffs and police showed admirable restraint.

They didn’t shoot a single “protester.” I applaud every single police officer on scene for their decorum in extraordinarily difficult circumstances. 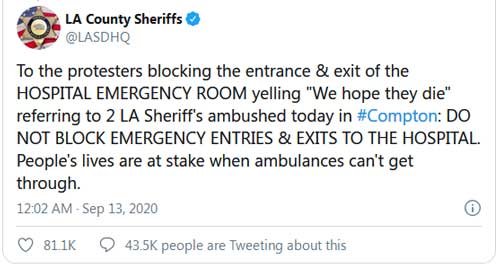 Likewise, I unreservedly condemn every person in that hate-filled mob.

While it’s an unpopular truth in today’s anti-police environment, police officers don’t wake up in the morning, look themselves in the eye in the mirror and say, “Gee, I think I’ll go shoot a [insert minority of your choice here] person today.”

Police officers typically wake up in the morning and think one of two things, and sometimes both.

I guarantee you the 31-year-old mother of a 6-year-old boy prayed the second thought every single day, and I’m willing to bet she also prayed the first.

By chanting “We hope they die!”, “Death to police!” and “You’re next”, these despicable degenerates highlight one more time (as if we need a reminder) three things:

Before Canadians jump on top of their high moral horse, we are not immune from this horrifying level of stupidity.

Thankfully, they escaped the scene unharmed.