When You Meet a Veteran, Thank Them For Their Service

Not just today, but every day

“Dave was one of the last true gentlemen. He served his country. He did it well, he did it professionally, and then went on to be a leader in his community.”
– Captain Malcolm Young, secretary-treasurer, Saskatoon Light Infantry Association

Eventual Canadian war hero David Georges Greyeyes came into this world on December 31, 1914, on the Muskeg Lake Reserve. He attended the Lebret Industrial Residential School from 1922 to 1933, and farmed grain and worked in bush camps in northern Ontario until he joined the army.

At the age of 25, David Greyeyes enlisted in the Canadian Army in June of 1940.

His excellence with both rifles and machine guns led to his assignment as an instructor for a machinegun reinforcement unit in Great Britain.

He delivered advance weaponry training to new soldiers for over two years. His superiors then shipped him back to Canada, British Columbia specifically, for officer training.

Unsurprisingly, Greyeyes excelled at officer training and returned to Great Britain five months later with the rank of lieutenant. He was the first Status Indian to earn a commission overseas.

Greyeyes served as a platoon commander with the Saskatoon Light Infantry for the next 17 months, fighting in Sicily, mainland Italy, North Africa, France, Belgium and The Netherlands.

During his time in Italy, Lieutenant Greyeyes earned the Greek Military Cross for valour for his actions in support of the Greek Mountain Brigade.

In September 1944, the 3rd Greek Mountain Brigade was assigned to I Canadian Corps to gain battle experience during the Corps’ attack against Rimini, a city on Italy’s Adriatic coast.

In the early hours of 14 September, the Greeks moved forward to secure the right flank of a Canadian attack. They had been strengthened by the addition of Canadian anti-tank guns, plus a machine-gun company and the mortar company from the SLI(MG).

As the Canadian attack continued toward Rimini, the Greeks made slow progress against heavy German resistance and lost more than 100 men. Early on 21 September, a Greek patrol reached the southern outskirts of Rimini and the brigade was given permission to enter the city. By 8 a.m., a Greek flag flew over the town hall.

David Greyeyes-Steele later recalled the road to Rimini was bleak and “there was quite a lot of destruction.” For his support of the Greek Brigade, he was awarded the Greek War Cross (Third Class), one of only 14 Canadians to receive this medal for heroism during the battle.

When the war ended in Europe, David Greyeyes volunteered to serve in the Pacific Theatre but Japan’s surrender led to him being stationed in Germany as an intelligence officer for the Royal Winnipeg Rifles, part of the Canadian Army Occupation Force.

David Greyeyes then returned to his former life as a grain farmer on the Muskeg Lake Cree Band and married another veteran, Flora Jeanne, one of the first women to join the Royal Canadian Air Force.

In 1958, Greyeyes became chief of his band and, in 1960, joined the federal civil service where he eventually became a Regional Director of Indian Affairs.

Always an athletic man, David Greyeyes loved many sports but soccer was his favourite. He was a three-time member of the Saskatchewan All-Star Team, a member of the Overseas Army Championship team in 1942, and played in the 1946 Inter-Allied Games.

His commitment to the sport led to his induction into the Saskatchewan Sports Hall of Fame in 1977, the same year he was awarded the Order of Canada.

He remained a member of the Royal Canadian Legion and Army and Navy Veterans until his death.

David Georges Greyeyes-Steele (he took on his father’s name late in his life) died in 1996 in Saskatoon, Saskatchewan. He was survived by his wife of almost 50 years, Flora Greyeyes-Steel, their two sons, six daughters, and fourteen grandchildren. 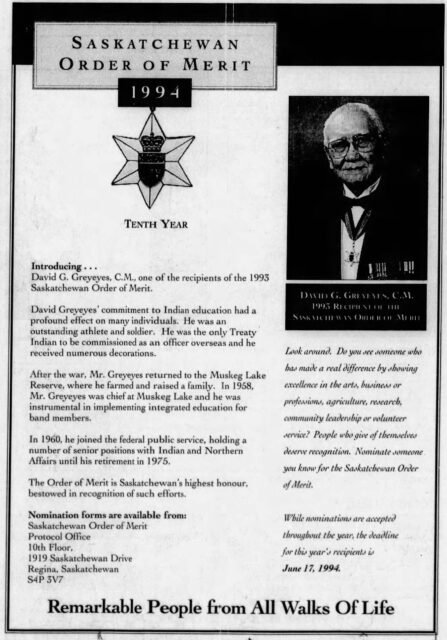