Will the next Canadian federal election be marred by widespread electoral fraud? Some would contend election fraud arrived ages ago, albeit not in any organized fashion.

But are those people correct?

Elections Canada says it identified over 85,000 names on the federal voter list who were not citizens prior to the 2019 federal election. They removed 74,000 of those ineligible voters but gave no explanation why the other 9,000 were kept.

According to one CBC report, Elections Canada also identified roughly 3,500 cases of people voting where there is “conflicting evidence about their citizenship.”

Despite the large number of case, Elections Canada only filed six (6) criminal charges against individuals for violating the Canada Elections Act.

Yet after the 2015 federal election they filed only 18 criminal charges against individuals.

After the 2011 election the was just eight.

By the numbers, it’s pretty clear they don’t.

No Proof of Citizenship Requirement

Elections Canada published an image, shown below, during the leadup to the recent federal by-election in York Centre which asked, “Are you planning to vote?” 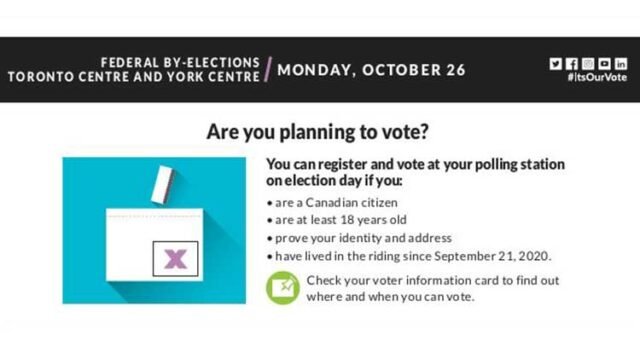 Note the language. You must prove your identity and your address, but NOT your Canadian citizenship. If this strikes you as bizarre, you’re not alone.

Elections Canada agents are not permitted to ask anyone for proof of citizenship, only proof of residency.

According to Elections Canada, this is because “there is no one piece of identification that is universally held by all Canadians to prove citizenship. Therefore, requiring documentary proof of citizenship when registering could disenfranchise many eligible electors.”

And because we refuse to require proof of citizenship before voting, this is where Canada’s electoral system breaks down.

Elections Canada does not have the ability to validate citizenship, therefore anyone with a Voter Identification Card can cast a ballot, even if they’re not a Canadian citizen.

Elections Canada readily admits there is no safeguards to prevent non-citizens from voting.

“While we clearly communicate the citizenship requirement to vote, we depend on individuals to accurately indicate their Canadian citizenship, so we recognize the process is not perfect,” said one Elections Canada official.

There are more than 57,000 non-citizens and almost 207,000 dead people that Elections Canada knows about.

Could there be more?

One political operative that I spoke to told me of comparing the voters list, the one that showed who had voted, to obituaries and other databases on recent passings.

His comparison turned up many people that had voted despite being dead for years, people Elections Canada obviously didn’t know about.

How Voters are Registered

Part of the problem is that Elections Canada automatically registers voters using a variety of provincial and federal government databases.

We manage voter registration information using the National Register of Electors (the Register), a permanent database of Canadians who are eligible to vote in federal elections, by-elections and referendums.

We continually update the Register from a range of sources, including

While we clearly communicate the citizenship requirement to vote, we depend on individuals to accurately indicate their Canadian citizenship.

In 2018, Parliament passed Bill C-76, the Elections Modernization Act, which gave the Chief Electoral Officer access to citizenship data to help clean up voter lists to remove people who are not Canadian citizens.

Adding to the problem is when the Liberal government updated our electoral system in Bill C-76, they purposefully removed the prohibition on using a Voter Identification Card as valid Voter ID.

In essence, the fact a person has a Voter Identification Card is considered proof they are a Canadian citizen and therefore eligible to cast a ballot.

While this Liberal legislation closed the bathroom window on one avenue of voter fraud, it opened both barn doors to another.

This is insane but, as I often say….

It is an offence to lie about your citizenship status under the Canada Elections Act.

91 (1) No person or entity shall, with the intention of affecting the results of an election, make or publish, during the election period,

(b) a false statement about the citizenship, place of birth, education, professional qualifications or membership in a group or association of a candidate, a prospective candidate, the leader of a political party or a public figure associated with a political party.

The typical penalty, based on charge outcomes, for lying about citizenship and casting a ballot in an election is a $500 fine.

Another issue we learned about just recently is Elections Canada says it has no way for Canadians to confirm their mail-in ballot was counted if an election is held this spring.

“There are ways this could be done and is something we could explore in the future, but if we’re looking at a spring election, this is not something we could implement in the short term,” said Chief Electoral Officer Stéphane Perrault.

I’ll be shocked if Trudeau doesn’t find a way to force the pandemic election he wanted so badly this fall. He needs a pandemic election  to win back the majority government he lost during those halcyon BlackFace Days. And he doesn’t dare wait too long or people will remember he’s the one responsible for the economic nightmare our country is embroiled in.

Will we see voter fraud in the next federal election?

Absolutely, and for two reasons.

First, because Elections Canada is not permitted to verify citizenship, and second, because the Liberal Party which currently forms government refuses to change our elections laws to prevent non-citizens from voting.

Will we see voter fraud on the massive scale we’re seeing in the 2020 US Presidential election?

No, for myriad reasons, the primary one being Canada has a completely different voting system than the United States.

In Canada, we have an independent federal agency responsible for conducting national elections.

In the United States, each individual state has its own laws governing how an election is run and every county is managed by a partisan political operative.