RE: The Conservative Party, as with most Canadians, finds outrage and revulsion in some of the more brutal facets of Middle Eastern and Asian culture. Previously, under the stewardship of the Liberal Party of Canada and its lunatic policies of multiculturalism, immigrants have been welcomed to Canada with no instruction that Canada will not tolerate honour killings, female genital mutilation nor any of the other barbaric and Neanderthal cultural practices of Middle Eastern, Asian and third world countries. In fact, the Liberal Party of Canada has wholly endorsed, encouraged and fully supported some of these depraved rituals through its program of multiculturalism.

The Conservative Party in accordance with the wishes of most decent Canadians, including most recent newcomers to Canada, seeks to change that lunacy by instructing immigrants and newcomers to Canada that barbaric and murderously depraved ritualistic killing and disfigurements will not be tolerated in Canada and the same will result in criminal prosecution and jail time. In fact, in a pamphlet issued by Immigration Canada, the word “barbaric” is used to describe the “honour killing” of women.

Unbelievably, Justin Trudeau, speaking on behalf of the Liberal Party of Canada in the House of Commons in Ottawa, has expressed his outrage at Immigration Canada’s use of the word “barbaric” to describe the ritualistic slaughter (honour killing) of women. Justin Trudeau feels that the use of the word “barbaric” abuses the human rights of those who butcher women for crimes that include but are not limited to: the failure to have dinner ready on time, failure to perform sexual acts immediately upon command, filing for divorce, reporting assault and battery to the police, not wearing a headscarf etc, etc. Justin Trudeau has demanded the immediate removal of the wording “barbaric” from the Immigration Canada pamphlet and the word “unacceptable” be substituted instead. (note: its only fair to point out that, under considerable pressure from Canadians coast to coast, Justin Trudeau has backed away from his original state of rabid, foaming Liberal Party indignation)

I suppose Justin Trudeau would call terrorist bombings “Man made mishaps”…or the horrific mutilation of young girls’ genitals to be no more than a “Cultural difference adding vibrancy to the multicultural fabric of Canada.”

Perhaps Justin Trudeau can travel to the Middle East and attend a stoning…he can whisper in the victims ear that “The Boys don’t mean anything…they’re just a little high spirited”. Justin would most likely call the wrapping of children in explosives to be nothing more than “Islamic creativity in child care”….”I mean, as Liberals,…who are we to judge??”

Considering your love, your reverence and fondness for brutal, horrific, depraved and sickening facets of Middle Eastern and Asian culture why don’t you go home this evening and immerse yourself in Middle Eastern culture…..(you must remember cultural immersion Justin….its kinda like what yer Daddy did, you know, riding around Montreal during the Second World War, wearing a Nazi helmet, in sympathy with those  boisterous, goose stepping, bratwurst noshing, lager chugging National Socialists who were so overworked trying to stuff an entire race into the ovens, whilst our Canadian soldiers were dying on battlefields)…. You can live out the experiential fantasy of every Liberal by laying a good “honour beating” on your mother for her repeated public displays of stupidity and drunken driving……I’m sure Daddy  would be proud of you both.

I suppose, like you, I could couch my closing remarks in “Liberal-Party-Politico-Speak” by saying that opinions and personalities like yours are usually only discovered by proctologists during the course of their work day, but I won’t. Being a Western Canadian, I’ll get to the point in plain English (please forgive the intemperance):

Justin Trudeau you are an asshole and an embarrassment to Canada. In light of recent international events condemning the cancer of multiculturalism (another one of your fathers’ bastard children) it is obvious, in your case, that the proverbial apple didn’t fall too far from the tree.

…..(and Mr Trudeau, whilst you are choking on the Liberal bile rising in your throat, I’II say it for you….this amounts to nothing more than the hateful, intolerant, bigoted, rigid, homophobic, xenophobic,  narrow minded, genocidal, racist, misogynist, self serving, malignant propaganda of another monstrous, indian abusing, anatadaephobic,  immigrant hating, redneck, Western Canadian Conservative, Right Wing Extremist, oppressive, land stealing, dream-catcher destroying, happy hunting ground plundering White Devil….who, considering his refusal to continue funding the criminal and outrageous actions of our “New Canadian Immigrants”, must be a closet Neo-Nazi who not only doesn’t buy his coffee at Starbucks but burns crosses on the weekend and kicks his dog…….what a bastard I am!!!!!)

PS: I have taken the liberty of including a photograph of Bibi Aisha, a young girl from Afghanistan, who suffered grotesque disfigurement at the hands of her muslim relatives….I suppose the Liberal Party of Canada would classify this horrific crime as nothing more than “The complicated and easily misunderstood family dispute resolution mechanisms of an Afghan Family…..and who are we to judge anyway” 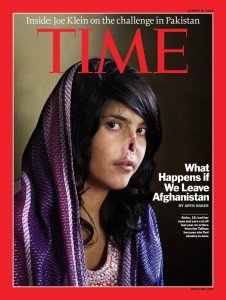