On August 18, 2020, 53-year-old Dan Forsyth was arrested and his home was searched. He now faces 11 criminal charges including two for firearms trafficking.

“Make no mistake, printing 3D firearm parts is a criminal activity. Alberta’s law enforcement team will disrupt and dismantle serious and organized crime in our province, including the printing of 3D firearm parts,” said Kaycee Madu, Minister of Justice and Solicitor General.

It was the end of an investigation that began in April 2019, and was a collaborative investigation between ALERT, the RCMP’s National Weapons Enforcement Support Team (NWEST), and the Lethbridge Police Service.

“I am not in a position to discuss specific operational techniques, other than to say it was a multifaceted endeavour. It is alleged the firearms’ parts were being manufactured using commercially available 3D-printing technology,” Borbandy said.

Dan Forsyth is charged with ten manufacturing of firearms and firearm possession charges, but it’s Forsyth’s alleged violation of a firearms prohibition order that caught my attention.

Then, as I read the few news stories available, ALERT’s deceptive use of a photo of an assembled AR-15-style firearm among the items seized from Forsyth’s home piqued my interest.

I say deceptive, because of this statement made by Staff Sgt. Leon Borbandy.

“No completed firearms or fully functional 3D-printed firearms were seized from the home. Currently ALERT has no evidence to suggest that any of these firearms parts were sold. However, that component of the investigation is ongoing.”

If “no completed firearms or fully functional 3D-printed firearms” were found at the scene, how does Staff Sgt. Borbandy explain the photo his team published with their press release? 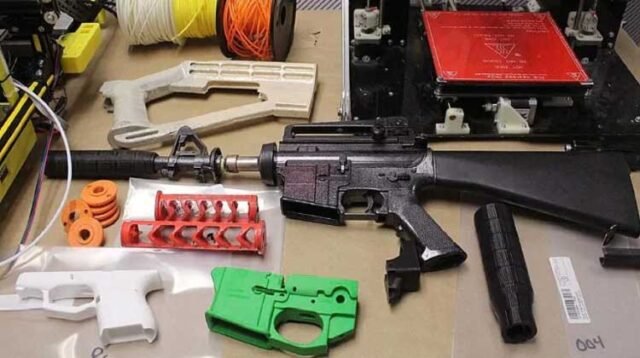 I’ve reached out for clarification, and if Staff Sgt. Borbandy responds to my request, I’ll update this story accordingly.

Using 3D printing technology to manufacture gun parts, like Cody Wilson’s single-shot Liberator pistol, is an evolving technology. Since Wilson proved it was possible to create an entire functioning firearm using his 3D printer, ingenious people from around the globe have pushed the envelope to see if there is a upper limit to “possible.”

Politicians and some police forces love to use this technology is used to terrify the uninformed.

Can a person print a functional firearm using nothing but off-the-shelf equipment?

Sure, but it still requires in-depth knowledge and a level of technical skill to turn a computer file into a tangible physical object.

The files required to print a variety of different firearms and firearm parts have been available on the internet even before Cody Wilson broke the “barrier of what’s possible” in many people’s minds.

From my research, most people who do so are curious and want to learn. They’re not interested in building guns to sell and, to that end, I’m baffled why police laid criminal charges against Dan Forsyth.

“ALERT has no evidence to suggest that any of these firearms parts were sold,” Staff Sgt. Borbandy said during his press conference.

What little we know so far simply doesn’t add up.

There are far more questions than answers here, unfortunately, but I look forward to learning the full story as Dan Forsyth’s case makes its way through the court system.

Dan Forsyth’s next court appearance is October 7, 2002. He faces charges for the following criminal offences:

Judges typically don’t issue a firearms prohibition order against someone without a good reason – typically a conviction of a criminal offence – yet I wasn’t able to find a published judgment against Dan Forsyth in either the Alberta Courts database or the Canadian Legal Information Institute database.

While it’s a dead end for my curiosity, the lack of a published judicial decision is quite common. Frustrating for researchers like me, but common.