Congratulations to Erin O’Toole, the new leader of the Conservative Party of Canada.

Hopefully it includes sweeping out the rot at Conservative Party Headquarters (and the rest of Ottawa, too).

Now, a few hard questions for CPC HQ and the utter debacle they displayed for Canada last night. 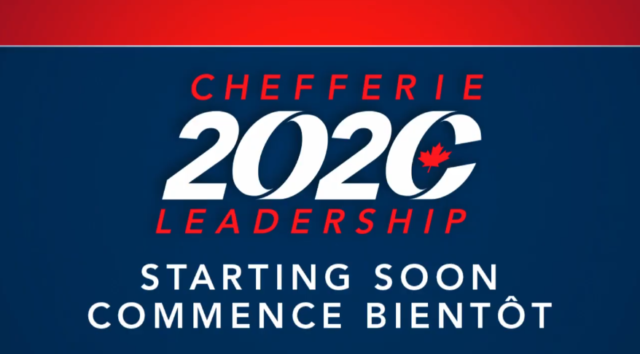 CPC HQ, are you so self-absorbed you can’t think beyond the immediate moment?

CPC HQ, are you so self-obsessed you can’t be bothered to consider what might go wrong and build contingency plans for each scenario?

From out here in the cheap seats occupied by mere citizens, the answer to both questions is a resounding “YES!”

Why, when you knew the train was going off the rails, did you not send MPs to every network in the country so they could fill all that dead air with a positive Conservative message?

Why did you let every talking head in the nation ridicule you and, by extension, all 270,000 members of the Conservative Party?

Instead of seizing the opportunity to turn toilet water into wine, CPC HQ, you wallowed in the swill, content to place a stupid image (see above) on Facebook and YouTube while you pretended your complete and utter failure wasn’t displayed on national television for over 6 hours straight.

Disgraceful doesn’t even begin to describe your conduct.

How can the Conservative Party expect be taken seriously as the “government in waiting” when they can’t even run their own leadership contest without turning it into a total disaster?

I’ll get back to that question in a moment.

First, I want to walk through how I spent my Sunday morning.

At 11:30am, I sent an email to my Conservative EDA’s mailing list (I’m the Comms Director) with links to watch the results as they were announced, beginning at 3pm Pacific time. (Although I may not be after tomorrow night’s board meeting given this commentary!)

Then, as 3pm approached, the Party announced the results would be “a little late.”

So I sent an email update to let people know about the delay.

I added links to some of the live coverage streaming on the web, including Rebel Media, True North News and all the major networks.

As the delays continued, I sent out more updates to our membership.

Then I sent out another update.

Then I gave up on sending updates because the Conservative Party’s incompetence was simply too embarrassing to distribute any further.

There wasn’t even a hint of when the announcement might happen.

They are complete and utter failures at communicating.

These folks need to brush up on three simple rules of communication.

Anything, literally ANYTHING would be better than the pathetic “Starting Soon” graphic shown for hours on the Conservative Party’s YouTube channel and the Cone of Silence placed over the entire debacle.

Now, back to my question.

How can the Conservative Party be taken seriously as the “government in waiting” when they can’t even run their own leadership contest without turning it into a total disaster?

The short answer is simple.

The long answer is far more damaging for the Conservative Party. 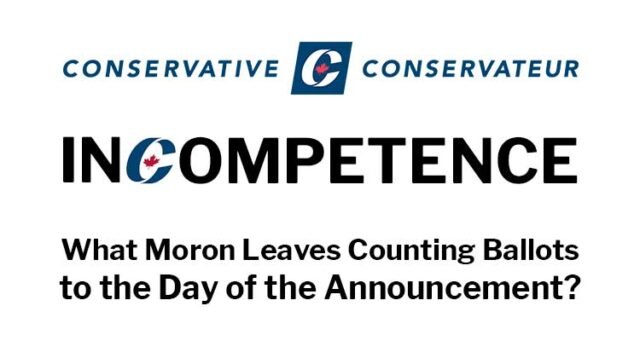 Ballots began arriving at the Ottawa office a month ago.

I fully comprehend it takes time to validate each ballot, then stack them into plastic bins so they can be counted later.

Here’s what I don’t comprehend.

Once ballots were validated, why were they left in a storage room until the morning of the announcement?

Why did counting not begin on Friday night, as soon as the deadline passed?

Or even Saturday morning?

Why leave this critical task to the last second?

The Party knew they had record voter turnout. I know they knew because Cory Hann crowed about the record-breaking voter turnout in an email he sent on August 19th, four days before the scheduled announcement.

Then, when the train fell off the rails, they attempted to blame that same record-breaking voter turnout for the six-plus hours of delay.

So I ask you, CPC HQ, who is the moron who decided NOT to begin counting ballots until the last minute?

Whoever he or she is, fire them immediately, loudly and publicly and, while you’re at it, toss in the sincerest apology you can muster and beg for forgiveness.

This is the very least you should do.

Once the deadline for ballots to arrive passed (Friday at 5pm Eastern), I can’t think of a single, rational reason why counting could not and should not begin immediately.

Clearly, smarter folks than me are in charge of the Conservative Party, and those supposedly smart folks completely bungled this event.

My friends in Ontario gave up and went to bed.

I can’t blame them. After a six-hour delay and no sign of an announcement in sight, seriously, why stay awake?

If it wasn’t for the irreverence and hilarity of Ezra Levant and Sheila Gunn Reid on the Rebel Media YouTube channel, I would have done something far more productive with my time, too.

But they were hilarious.

So I kept watching.

And I kept laughing.

And while I was at it, I wrote this commentary.

Eventually, or should I say finally, the first round results were announced.

Then another long delay with more empty air time on national television and another squandered opportunity by the Conservative Party.

Through it all, I wondered why the Conservative Party refused to lift a finger to ease the embarrassment of their own making when 121 Conservative Members of Parliament were available to fill those hours of airtime.

The smart people in CPC HQ clearly know better than mere citizens like me.

What could 121 Conservative MPs possibly discuss in six hours of otherwise dead air on national television?

So, if you’re reading this, I have a favour to ask.

Please let me know your thoughts on the absolute sh*t show the Conservative Party put on last night.

I’d love to hear your thoughts in the comments section below.