On August 8, 2020, PolySeSouvient, one of Canada’s gun ban advocacy groups, put out this tweet: 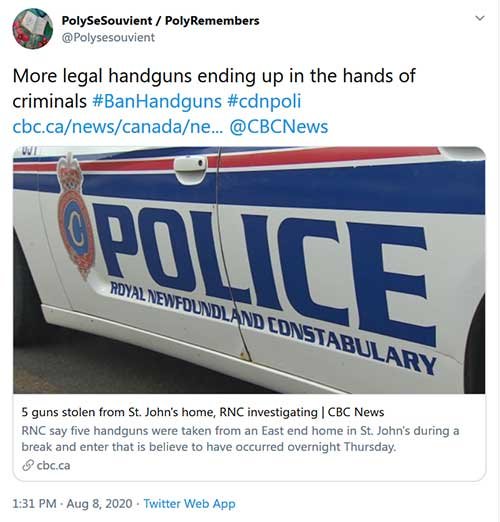 The implication is the handgun owner is responsible for the theft of his or her handguns, not the criminals.

There is no fault, no blame assigned to the thieves who broke into the house, then into the gun safe to steal these handguns, despite a minimum of three Criminal Code violations before they ever left the scene of the crime.

According to PolySeSouvient, the solution to criminals breaking into homes and stealing other people’s stuff is to ban anything criminals might want to steal.

Their solution is so brilliant that, frankly, I’m a little ashamed of myself for not thinking of this idea first.

I am, however, having a hard time envisioning this utopian society were nobody has stuff or houses to put it in.

I suppose it will solve the poverty problem, though, but winters are rather chilly in most parts of Canada. I’m no shrinking violet, but I still don’t want to live outside in February, hiding in a snowbank with no clothes just so someone can’t steal them from me.

PolySeSouvient’s visceral hatred of guns blinds them to many basic facts of civil society.

None of these laws stopped Darnell Reid from brutally murdering Darian Hailey Henderson-Bellman, yet I don’t recall a single tweet about her tragic death from PolySeSouvient.

Couldn’t find a single one when I searched their Twitter feed, either.

Screaming from the rooftops about the domestic violence murder of a young woman by a man with an illegal handgun, one would think, would be at the top of their list of advocacy items.

That PolySeSouvient, and every other group like them, refuses to lift a finger to fix Canada’s failed Firearm Prohibition Order system says more about PolySeSouvient’s true motives than any moronic tweet blaming the victim of crime for the actions of the perpetrator.

On that note, I’ll leave the last word to Twitter user @TriqnTori:

So victims of crime are responsible for what happens to them.

What did those 14 women do to deserve what happened to them?