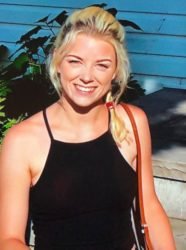 On Tuesday, July 28, 2020, Darian Henderson-Bellman was murdered, shot dead in the ultimate act of domestic violence.

Her alleged murderer, Darnell Reid, was out on bail despite violating a restraining order barring him from contacting Ms. Henderson-Bellman.

He was out on bail, despite repeatedly violating a Firearms Prohibition Order.

In fact, Darnell Reid was arrested for weapons offences (again) in May but some moronic judge decided, against the pleas of Crown counsel, that releasing this violent, repeat offender would not have any negative consequences.

Why were the pleas of Crown counsel that he was a danger to Darian Henderson-Bellman ignored by this judge?

Why was Darnell Reid’s history of domestic violence and repeatedly violating court orders ignored by this judge?

At what point do we stop granting bail to repeat, violent offenders?

If Darnell Reid is the measuring stick, the answer is never.

The sadness I feel for the victim and her family is mixed with frustration for a complete failure of our justice system to protect her.

At the time of this incident, the accused was the subject of an interim judicial release stemming from a previous domestic violence incident between the accused and the victim.

Since that charge, he had been arrested on four separate occasions for breaching terms of his release by being in contact with her.

This is such an egregious example of our justice system failing that young lady (and) failing our community. (The suspect) was arrested for having a firearm and they let him back out again just recently. It’s unimaginable and so I want to continue advocating for this bail reform.

The Individual, who has now been charged with murder, breached his (bail) release on four different occasions… On the fifth, it was too late [for Darian Henderson-Bellman].

One thing that’s frustrating is a year ago, the mayors in the GTHA and all the chiefs of police had a meeting where we advocated for bail reform. If you’re a dangerous offender, you should be in a correctional facility, not released. It speaks to the revolving-door nature of our justice system.

These sensible calls for bail reform are an affront to Andrew Puiras, a criminal defence lawyer from Sudbury, Ontario.

This was a horrible tragedy, to be sure. But these comments are disconcerting and irresponsible for a number of reasons. They undermine the rule of law, the independence of the judiciary and the public’s confidence in the administration of justice.

No, what undermines the public’s confidence in the administration of justice, Mr. Puiras, is a system that puts the rights of violent repeat offenders like Darnell Reid ahead of the safety of the rest of us.

It is unclear whether this tragedy could have been prevented.

Wrong. If a judge did not release Darnell Reid after numerous prior violations, Darian Henderson-Bellman would be alive today.

In any event, no judicial officer can predict, Minority Report-style, whether an accused person will commit a violent offence while on bail.

Past behaviour is a pretty good indicator of future behaviour. One doesn’t require Minority Report-style tech to comprehend four previous violations of a No Contact order all but guaranteed a fifth violation was coming up fast.

Bail is a protected constitutional right in Canada. Section 11(e) of the Canadian Charter of Rights and Freedoms provides that a person charged with a criminal offence has the right “not to be denied reasonable bail without just cause.”

If four violations of an existing No Contact order are not “just cause” for denying bail, surely the repeated firearm offences are, Mr. Puiras.

I utterly fail to comprehend how you can take the position denying bail to Darnell Reid is, in any way, “without just cause,” and keep a straight face while doing so.

Halton Regional Police Service Chief Steve Tanner uses a rare, horrible tragedy to imply that the system is stacked in favour of the accused and there is an epidemic of violent crimes being committed by dangerous offenders while on bail. This is simply not the case.

I’ll take Chief Tanner’s word over yours, Mr. Puiras, as my research backs up his statements, not your willfully blind (and dare I say self-serving) assertions.

Long periods of incarceration result in the loss of jobs, housing and family ties, and put pressure on the accused to plead guilty in order to resolve their case and get out of jail.

I’ll trade one unemployed and held-until-trial Darnell Reid for a living Darian Hailey Henderson-Bellman every time, Mr. Puiras. So would her grandparents, the couple who raised Darian from the time she was a baby.

I’m appalled you would not.