When is an apology meaningless?

When it comes from the mouth of a Trudeau.

Saying you are sorry, when not followed by an immediate change of heart and behaviour, is meaningless drivel designed for one reason only – to change the channel on the news cycle. 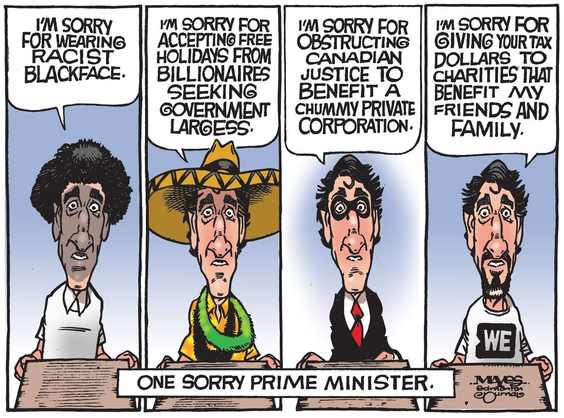 When the blackface photos came to light, Justin Trudeau apologized, claiming his white privilege caused him to not see things correctly.

“This is something that I deeply, deeply regret. Darkening your face, regardless of the context of the circumstances is always unacceptable because of the racist history of blackface. I should have understood that then and I never should have done it.”

He also admitted he didn’t recall how many times he wore blackface, presumably because it wasn’t something memorable enough to bother counting.

“I didn’t see that from the layers of privilege that I have and for that I am deeply sorry and I apologize.”

The Kokanee Grope, Victim-Blaming and Trudeau’s Blatant Avoidance of the Issue

“I’ve been reflecting very carefully on what I remember from that incident almost 20 years ago and again, I am … I feel I am confident that I did not act inappropriately.”

“If I had known you were reporting for a national paper I would never have been so forward.”

“There’s a lot of uncertainties around this. In terms of my recollection there was no untoward or inappropriate action but she was in a professional context. Who knows where her mind was and I fully respect her ability to experience something differently.”

“That’s the whole conversation we have to be having around this. People experience things differently and we have to be more thoughtful and that’s a big part of the collective awakening we have to have.”

“I’ve been reflecting very carefully on this and I think we are moving forward in the right way.”

“I am not going to speak for the woman in question. I would never presume to speak for her. But I know that there is an awful lot of reflection to be had as we move forward as a society on how people perceive different interactions.”

The problem is never Justin Trudeau’s – it’s always a collective problem “we” all can learn from.

“It is important that as we move forward, we learn from this mistake,” Mr. Trudeau said.

There we go…. the classic Trudeau avoidance tactic.

“We” must learn…. No Mr. Prime Minister, you must learn to behave appropriately. The rest of us are managing just fine without trust funds or an inbred sense of entitlement.

“The commissioner’s report this morning makes it very clear that I should have taken precautions and cleared my family vacation and dealings with the Aga Khan in advance,” Justin Trudeau told reporters.

Except for one pesky little bit of fact, as noted in the Conflict of Interest and Ethics Commissioner’s report:

Mr. Trudeau testified that, following the trip to the Greek Isles in 1983 with his father and two brothers, he did not have any interactions with the Aga Khan or the Aga Khan’s family until the death of his father in 2000.

The Aga Khan sent a handwritten note to Mr. Trudeau and his brother Sacha expressing his grief over the passing of their father. In his letter, the Aga Khan described his deep friendship with Pierre Trudeau and the great admiration he had for him. The Aga Khan was, at the request of the Trudeau family, an honorary pallbearer at the funeral.

Under the heading of “While a Member of Parliament”

Mr. Trudeau was elected to the House of Commons in 2008. Mr. Trudeau did not have any private interactions with the Aga Khan from the time he was elected until after he became Leader of the Liberal Party of Canada in April 2013. Mr. Trudeau recalled only two interactions during that period, both in an official context.

Close family friend?  Only be the definition in Trudeau’s person dictionary.

Mere citizens define these types of relationships as passing acquaintances, at best. But we mere citizens must live in the real world, not the rarefied air of the Perpetually Entitled One.

“The allegations reported in the story are false. At no time did I or my office direct the current or previous attorney-general to make any particular decision in this matter,” Justin Trudeau told reporters.

Despite his repeated protestations he did nothing wrong, the Conflict of Interest and Ethics Commissioner found otherwise.

“The evidence abundantly shows that Mr. Trudeau knowingly sought to influence Ms. Wilson-Raybould both directly and through the actions of his agents.”

Unlike Trudeau’s non-answers, the Ethics Commissioner was crystal clear.

Mr. Prime Minister, there’s a lesson for you there if you’re man enough for the challenge.

I am not hopeful….

Canad’as Ethics Commissioner launched an investigation into the decision to award $900 million to WE , a charity with deep ties to the Trudeau family. It also marks the third time Canada’s Most Entitled Prime Minister will be investigated for violating conflict-of-interest rules since coming to power in 2015 on a promise of openness and transparency.

Just because Marc and Craig Kielburger and Prime Minister Justin Trudeau want to walk away from a mess that seems entirely of their own construction does not mean they should be allowed to do so.

Passing out big bucks to everyone who had anything at all to do with it seems to be the essence of this entire scheme. Here’s $900 million: spend half of it to give the other half away. Hell, with that mandate, even I could run it.

“I made a mistake in not recusing myself immediately from the discussions given our family’s history, and I’m sincerely sorry about not having done that,” Trudeau told reporters.

I believe the Prime Mistake’s correct statement is below:

“I made a mistake by not keeping this secret better and I’m sincerely sorry I got caught. Again.”

If only Justin Trudeau was capable of such honesty.

It’s clear he is not and that should be a problem for all Canadians, no matter where you are on the political spectrum.