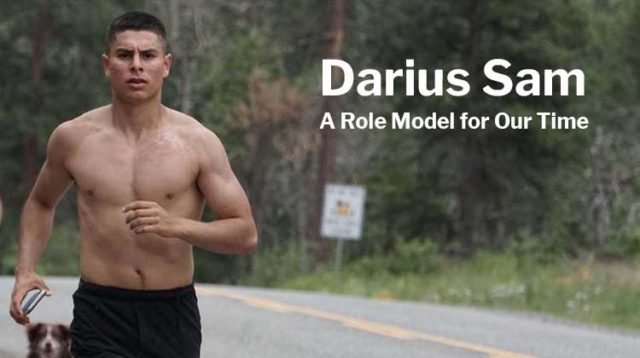 A young man from Merritt, British Columbia, woke up one morning after another long night of drinking and took a hard look in the mirror.

He didn’t like the person looking back at him.

So he decided to change.

Like many young people his age, Darius Sam spent a lot of time drinking too much and partying, indulging in the excesses of youth. It’s a natural part of growing up. I can attest to that, insofar as I did the same thing when I was a young man.

The unusual part of this story, if you’ll permit me to call it that, is what this 19-year-old did to completely alter the course of his life.

I doubt Darius thought of it that way at the time although he probably does now, but whether he realized it consciously that fateful day or not, Darius chose to become a leader.

But exactly how does one transform oneself from a partying, drinking-to-excesses young man into a leader almost overnight?

By taking the single most important step anyone can.

Darius Sam made a decision.

“I decided to tighten up. I moved home, set goals and decided to make myself accountable,” he said.

He followed his decision with action.

“There are people out there who are struggling. Me sleeping in my bed every night with a full stomach, it made me feel privileged, it didn’t make me feel too good, so I knew I had to do something about it.”

Darius approached the Nicola Valley Food Bank and asked if he could help by doing a 24-hour fundraising ultra-marathon. They were thrilled with the idea, so he set up a GoFundMe page and started training.

“Due to these difficult times I have decided to take action and do my part in servicing the community. There are many people who are struggling financially and struggling within our community, so I have decided to make it my goal to raise money for the Nicola Valley Food Bank. I believe we as humans are stronger together, by offering a helping hand we will not only make a difference. We will rise together through this adversity! I will run 100 miles in under 24 hours.”

Three Weeks of Training Plus an Iron Will Equals… Failure?

“I’d be lying if I said I wasn’t nervous. I’ve been training pretty hard, so I feel confident, but I know it’s going to be tough,” Darius said in a television interview before he began his ultra-marathon.

He knew it would be difficult long before he started. With only weeks of training under his belt, he relied on his pre-existing physical fitness and his mental toughness to make it through.

“I made it through mile 50 and I was absolutely exhausted. My brain… my brain kept telling me to stop, but I pushed through it, pushed forward,” he said.

That was at the half-way point of his journey. He still 50 miles to go.

“What happens, man, it doesn’t matter as long as you know you gave it 100%,” said a supporter running along side him.

“I’m not done yet,” was his terse reply.

It would get much worse and not even the news he doubled his fundraising goal of $14,000 could take the pain away.

When he hit the 90-mile mark, just ten miles shy of the finish line, Darius Sam’s body simply gave out.

He had to stop.

When exhaustion and dehydration threatened to derail this young man from his dream; when his body failed and his friends and family insisted he go to the hospital because they were afraid for his life, Darius Sam refused to say, “I quit.”

He accepted medical treatment, including intravenous re-hydration, to get his body back on track.

Then he checked himself out of the hospital and resumed his ultra-marathon.

Here’s what I find so impressive about Darius Sam.

Nobody on earth would think poorly of him for quitting after running 90 miles. He was taken to the hospital suffering from exhaustion and massive dehydration, for crying out loud!

Quitting under those circumstances, in the world’s eyes, would be totally understandable, acceptable even.

But Darius Sam clearly doesn’t judge himself through the world’s eyes.

He judges himself through the eyes of the man who stares back at him in the mirror. And through those eyes, quitting is simply not an option.

Darius Sam didn’t stop when the going got really rough, like so many of us would.

He refused to stop just because it was difficult. Some things in life will always be difficult.

It’s in those moments we learn who we really are, and whether or not we value our own integrity and honour.

So I’ll ask again, Why did Darius Sam refuse to quit when his body failed him and all the odds were stacked against him?

I’ll let Darius answer that for himself.

Despite the physical pain and anguish of keeping his commitment, Darius Sam said, while sitting in the hospital, “I came to the realization I needed to finish what I started regardless of the situation.”

“Never in my life have I ever stood for something like this. To see people come together like this, it’s unbelievable,” he said after crossing the finish line.

But Darius Sam Failed, Didn’t He?

Darius Sam ran 91 miles in 27 hours – an incredible feat, I admit – but he failed to achieve his goal.

So yes, by the numbers, Darius failed, but he failed the way Denzel Washington challenges every one of us to fail.

He also did the second thing Denzel preaches everywhere he goes.

If Darius Sam can accomplish so much for his community in failure, can you begin to imagine the impact he’ll have when he actually accomplishes the goals he sets for himself in the future?

Because on Saturday, June 13, 2020, in what some would consider failure, Darius Sam put the world on notice.

I will make a difference.

And I refuse to allow anyone or anything stop me.

This young man is a leader who will accomplish great things. Darius Sam from Merritt, British Columbia, is a man you’ll be reading about a lot more in the years and decades to come.

Personally, I can’t wait to see what goal he sets his mind on next!

Normally, I would encourage him not to set his sights too low, but I think he’s already got that nailed.

But if you’re going to fail, you might as well set your goals so you fail the way Denzel Washington dares every one of us to fail.

A Leader is Born

Darius Sam committed to run 100 miles in 24 hours to raise $14,000 for the less fortunate in his community. Before he ran the first stride of his personal ultra-marathon, his GoFundMe page total was already over $5,000.

As of June 24, Darius Sam raised $104,461 for the Nicola Valley Food Bank – almost $50,000 of that from his GoFundMe page alone. Direct donations to the food bank make up the rest.

Darius Sam’s commitment to his community so inspired the Rose family, former owners of the famous Quilchena Ranch, that they donated $35,000 to the Nicola Valley Food Bank in his name.

Don’t ever let anyone tell you one person can’t make a difference.

Darius Sam just proved one person is the only thing that ever has.

If you want to throw your support behind this this young man and his ongoing quest to help his community, please donate here: https://www.gofundme.com/f/nicola-valley-food-bank-fundraiser

Thank you for raising your son to value integrity, honour and commitment. Thank you for teaching him perhaps the most valuable lesson he will ever learn – his word his is bond.

Without you behind him, Darius could never accomplish this amazing feat. With you, he couldn’t be stopped, so thank you from the bottom of my heart for bringing such an amazing young man into our world.

P.S. When the day arrives that your son decides to run for public office, please let me know. I would be honoured to assist him in any way I can.