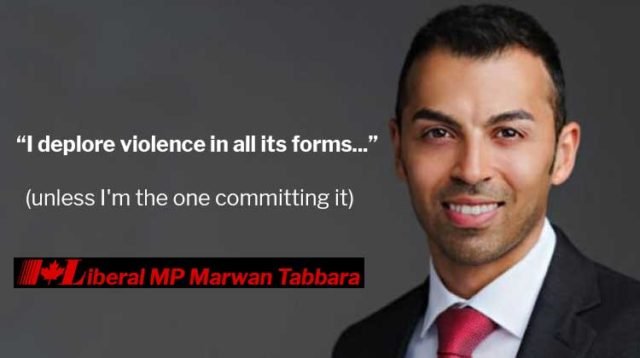 On April 10, 2020, Marwin Tabbara, the Liberal MP for Kitchener South—Hespeler, was arrested and charged with two counts of assault, one count of break and enter, one count of commit an indictable offence and one count of criminal harassment.

According to police documents, Tabbara allegedly began watching a Guelph home of an unidentified man and woman on January 1, 2020 and spent so much time there he made the female occupant fear for her safety. His disturbing behaviour ended the day of his arrest. The exact dates of the two alleged assaults, which both took place at this residence, was not released to the media.

Marwin Tabbara did not disclose his arrest to his constituents, his political party, or the Prime Minister.

“As we said, I and my office only learned about the serious charges against this MP on Friday,” Justin Trudeau said. “No one in my party or my organization knew anything about them until Friday, and when we found out about these serious charges.”

Tabbara didn’t resigned from the Liberal caucus when the criminal charges against him became public knowledge. He vows to stay on as a Member of Parliament, though his actions show a profound lack of integrity – an element most consider essential to the character of an elected official.

As my image above says, Tabbara is the ultimate hypocrite who cannot see his own hypocrisy.

From his June 5th statement:

As a proud Canadian who came to this country with his family to escape the violence of war, I deplore violence in all its forms.

In addition to my work and my commitment to human rights in Canada and abroad, I personally believe strongly in the right of every individual to live a life free of the hurt and trauma of physical, verbal or emotional abuse.

[See Tabbara’s full statement at the bottom of this commentary]

The Guelph Police Service did not disclose to the public a sitting Member of Parliament was arrested and charged with a crime of violence against two individuals.

[see my commentary on the arrest of Gerry Hawes, another member of Team Trudeau, on charges of child pornography.]

It’s obvious why Tabbara would try to hide the fact he was arrested for a violent crime, but why would the Guelph Police Service keep the arrest of a sitting Member of Parliament hushed up?

The Guelph Police Service has received numerous media inquiries with respect to the matter of the charges laid against Mr. Marwan Tabbara, MP for the riding of Kitchener South-Hespeler on April 10, 2020.

The Guelph Police Service adheres to the authorities as set out within s.41 of the Police Services Act and Reg. 265/98 thereunder for purposes of releasing information to the Public.

Daily Media Releases do not capture a comprehensive summary of all calls attended to by our members.  In this case, the arrest of Mr. Tabbara was not brought to the attention of the media office.

The Guelph Police Service will issue no further statements with respect to this matter.

There is no requirement to release any information about any person arrested and charged with a criminal offence.

It’s odd the Guelph Police Service would remain silent on the arrest of a Member of Parliament, but routinely issue press releases on the arrests of impaired drivers, drug dealers, violent criminals arrested with illegal guns, and child pornographers.

“Because the accused cannot be trusted to put the public’s welfare above his own, the onus is on police – whose job it is to maintain public order – to ensure the community is notified and updated.”

While this policy is out of step with many other G7 nations, it’s currently the law of the land in Ontario. Perhaps this is something we can petition the Ontario Provincial Legislature to change.

At the time of his arrest, Marwin Tabbara was chair of the Subcommittee on International Human Rights of the Standing Committee on Foreign Affairs and International Development. He was quietly removed from that role on June 11th. He is now listed as a member of the committee.

He now sits as an independent, having voluntarily resigned from the Liberal caucus days after the news of his arrest became public.

Section 3, Privileges and Immunities, discusses an MP’s privilege with respect to criminal law.

The special privileges of Members never were intended to set them above the law; rather, the intention was to give them certain exemptions from the law in order that they might properly execute the responsibilities of their position.

Members of Parliament are subject to the criminal law except in respect of words spoken or acts done in the context of a parliamentary proceeding.

However, it would be difficult to envisage a criminal act which would fit into or be a part of a parliamentary proceeding.

Therefore, it goes without saying that if Members are charged with infractions of the criminal law, they must abide by the due process of law. To do otherwise would show contempt for the Canadian system of justice.

The Library of Parliament published a research paper on parliamentarians charged with criminal offences on November 15, 2017. That report states the following:

In general, the laying of criminal charges against a member of the Senate or the House of Commons has no immediate legal implications with respect to their right to remain in office, with the exception of a procedure applicable to senators in certain situations.

However, in the case of a conviction for a criminal offence, the legal implications with respect to the parliamentarian’s right to keep their seat and their future eligibility are more serious.

In all cases, both houses of Parliament retain the power to expel members, whether or not they have been convicted of a criminal offence.

Although the legislation does not provide for any automatic consequences following the laying of criminal charges against a senator or a member of Parliament, both houses of Parliament may take preventive disciplinary action to protect the dignity and integrity of the institution.

Both the Senate and the House of Commons have the authority to order a leave of absence or to suspend a member for a period that may extend to the life of a parliamentary session.

In the House of Commons, no member has ever been suspended because of criminal charges laid against them.

In specific circumstances, a Member of Parliament may be removed from office, but only if they meet the requirements spelled out in Section 750 of the Criminal Code.

Two elements must be met.

The actual sentence, not the maximum prison term possible, is the determining factor.

As a proud Canadian who came to this country with his family to escape the violence of war, I deplore violence in all its forms.

In addition to my work and my commitment to human rights in Canada and abroad, I personally believe strongly in the right of every individual to live a life free of the hurt and trauma of physical, verbal or emotional abuse.

I am currently facing criminal charges which arose in April.

There are mandatory steps that must be taken to address a criminal case, and those steps take time, particularly with delays due to the pandemic.

Meanwhile, I continue to receive counselling and treatment for anxiety and depression, which I have been living with for some time.

Other than to state unequivocally that every incident of violence is unacceptable and inexcusable, it would be inappropriate for me to comment further while this matter is before the court.

In the interim, I will be stepping back from the Liberal caucus.

Meanwhile, I will continue to work diligently for my constituents, as their Member of Parliament, assisting them in accessing services and benefits to which they are entitled from their federal government.